When I signed up as a registered supporter of the Labour Party, Iain McNicol, the party's general secretary, wrote to me, saying how 'thrilled' he was to have received my application and how 'delighted' the entire party were to have me aboard: 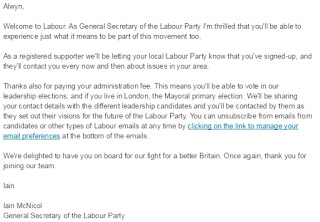 It was a little disconcerting to be addressed bluntly as 'Alwyn', rather than 'Dear Mr Turner'. But I assumed that he was a busy man and that he had a lot of these personal messages to send out. Also, he's younger than me - maybe he's more comfortable than I am in using first names with those who he's never met. In any event I forgave him, because I was, of course, equally thrilled and delighted 'to be part of this movement'.

Mr McNicol also thanked me for for my three quid 'administration fee' which, he assured me, 'means you'll be able to vote in our leadership elections'.

Sadly, all this camaraderie and bonhomie was not destined to last. When I came to cast the votes that I'd been promised, I discovered that, in the words of the late blues musician Roy Hawkins, 'The Thrill Is Gone'. 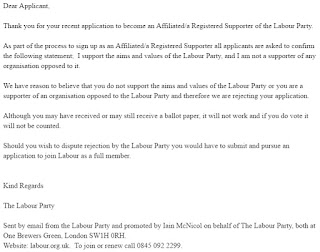 You'll note that Mr McNicol and I are no longer on first-name terms. Indeed we're not on any-name terms. I'm now 'Applicant' and he's 'The Labour Party'. A very definite frost has settled on our former friendship.

There are two grounds offered for this rejection. It may be, it is suggested, that I am 'a supporter of an organisation opposed to the Labour Party'.

Well, we can clear that up straight away. I'm not. I am not a member or supporter of any other political party. I've never tried to conceal, however, that I have voted for other parties at various points in the thirty-five years since I was first entered on the electoral register, sometimes for tactical reasons, sometimes because I preferred the alternative candidate.

In 1983, for example, I voted for Anne Sofer of the SDP because I (wrongly) thought she had a better chance of dislodging the sitting Conservative MP in my constituency. And in 2000 I voted for Ken Livingstone to become mayor of London, because I thought he'd be better at it than the Labour candidate, Frank Dobson. But voting is not the same as supporting.

So if that's not the reason for my exclusion, it must be the other argument: that I 'do not support the aims and values of the Labour Party'. I'm not, it's worth stressing, required to be a supporter of the party itself, but merely to support its 'aims and values'.

And what are these 'aims and values'? Well happily they're spelt out in Clause IV of the party's constitution, which opens:


The Labour Party is a democratic socialist party. It believes that by the strength of our common endeavour we achieve more than we achieve alone, so as to create for each of us the means to realise our true potential and for all of us a community in which power, wealth and opportunity are in the hands of the many not the few, where the rights we enjoy reflect the duties we owe, and where we live together freely, in a spirit of solidarity, tolerance and respect.

So far, so good. The only bit of that that I might feel like questioning is the assertion that Labour is 'a democratic socialist party'. But I do support the idea that that's what it ought to be.

The clause goes on to specify four key ambitions: a dynamic economy, a just society, an open democracy, a healthy environment. Yep, that's all fine with me.

I agree with all of that, as well. Even including the bit about needing 'the trust of the people to govern'. Indeed I made precisely that point in my piece about who I was intending to vote for.

The more I think about this, the more offended I am. Are the Labour Party seriously suggesting that I don't share their belief in 'peace, freedom, democracy, economic security and environmental protection'? If so, is this libellous? Because it feels very close to being defamation.

Maybe I should have a word with my local MP, Sir Keir Starmer. He's a lawyer, he'll know whether this is actionable or not. 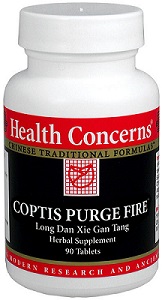