Jeremy Corbyn's status as a grass-roots favourite in the Labour Party is a recent phenomenon. In 1992, following a shock defeat at the hands of the Tories, twenty-three people stood for election to the national executive committee in the constituency members' section. Only the top seven were voted onto the committee, and the results were:
You can see which way the wind was blowing. In his heyday, Tony Benn - who'd been on the NEC since 1959 - used to come top of this annual poll; now he was barely hanging on to his seat. (And indeed the following year, he would lose it.) Meanwhile, Bryan Gould and Dennis Skinner were voted off in favour of two newcomers: Gordon Brown and Tony Blair.

In this context, it's perhaps not surprising that Corbyn didn't make the cut, but even so, it hardly suggests he was setting the membership alight at the time. Benn came in last of the winning group with 354,000 votes; Corbyn managed only 22,000. He was fourteenth overall, but more relevantly, of those considered at the time to be on the left of the party, he came eighth, behind not just Benn, Skinner and Gould, but also Ken Livingstone, Alice Mahon, Diane Abbott and Dawn Primarolo. Those last four, incidentally, all entered Parliament after him.

But that was then and this is now, so why am I bothering to drag this up?

Well, it's just to make again the point that Corbyn didn't enter the current leadership race with any intention - let alone hope - of winning. He knows he was never cut out for leader. So much so that he wasn't even a leader on the left. When Dawn Primarolo, of all people, gets twice as much support from party members, you can hardly take that as a vote of confidence in your ability to inspire the rank and file.

But, with the exception of Abbott (who had her go at the leadership last time), Corbyn's the last one available to stand. The rest are too old, too dead or no longer in Parliament. And so it fell to him. It's not that the Ugly Duckling turned into a swan, more a case of Pass the Parcel. 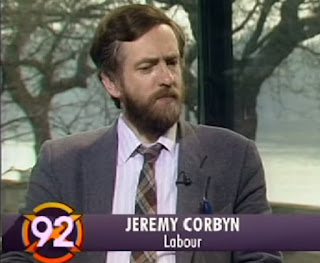 A month or so back, after the first television hustings, I suggested that Corbyn shouldn't be dismissed as lightly as he was being: 'When he talks of principles of fairness and equality, of community and public services, he resonates in a way that Ed Miliband never achieved.'

I think that's become very clear in recent weeks. But he's still not a leader.

When you think of the major left figures since the war - Nye Bevan, Tony Crosland, Michael Foot, Tony Benn, Ken Livingstone - some of them were great thinkers, some orators, some had presence. All were able to deploy humour, which goes a long way when trying to persuade the British voter of the virtues of left thinking. Corbyn lacks all of these gifts.

In the last election, Ed Miliband didn't lose because he was too left-wing. He lost because he was Ed Miliband. The same problem - mutatis mutandis - would be even more manifest with Jeremy Corbyn. Which is why he's not going to be elected leader.
Posted by Alwyn W Turner at 9:39 am