There's a lot of talk about the 1980s, all of a sudden. Particularly about the 1983 general election, when Labour went down to a crushing defeat. And since it's been a long time since I put a graph on this blog, I thought I'd remedy that with a chart showing the opinion polls conducted by Gallup on a monthly basis right through the 1979-83 Parliament. 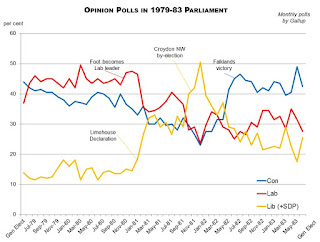 There are, as Sherlock would say, a couple of points of interest.

When James Callaghan relinquished the Labour leadership in November 1980, he left the party on a 47 per cent share of the vote, more than 10 points ahead of Margaret Thatcher's Conservatives. Michael Foot maintained that position for a few weeks, but then it all went catastrophically wrong.

In January 1981, Labour stood at 46.5 per cent. By December of that year, support had crashed to half that level, on 23.5 per cent. It still stands, I believe, as an all-time calendar-year record. And this was the year, of course, that Tony Benn challenged Denis Healey for the deputy leadership of the party, a particularly nasty and divisive contest.

So spectacular was Labour's decline that it tended to eclipse, then and afterwards, the appalling performance by the Conservatives in the same year of 1981. They started in January on 33 per cent, and ended in December on 23 per cent.

To present the figures like this, however, is not entirely honest. Because, as you can see on the graph, December 1981 was something of a rogue poll, showing a massive spike in support for the newly formed Liberal-SDP Alliance. The existence of a third force was the main cause of the decline in support for both major parties that year, but the Alliance was never to get anywhere near those dizzying heights again.

If we go to the poll published in April 1982 - the last one conducted before the Argentine invasion of the Falkland Islands - the figures stand at: Alliance 37 per cent, Conservatives 31.5 per cent, Labour 29 per cent. In other words, the Tories had remained fairly constant, and the Alliance had primarily taken its support from Labour.

Victory in the Falklands, combined with an economic recovery, saw the Tories end the Parliament back on track: they won 42.4 per cent of the vote in the 1983 general election, just 1.5 points down on the 1979 election. And behind them, virtually neck-and-neck, came Labour and the Alliance.

The standard explanation on the Left, obviously, was that the SDP had split the anti-Tory vote, gifting Thatcher a landslide that was simply not supported by her share of the vote. The bitterness - and lord, was there bitterness - was directed primarily at Roy Jenkins and David Owen for having led the breakaway from Labour.

My own interpretation is to lay the blame entirely at the feet of Labour MPs, who chose Michael Foot rather than Denis Healey as leader. With Healey as leader, life in the party would have been chaotic and vicious for a while (as it turned out to be anyway), but the SDP would not have come into being. At least not in that potent form, though Jenkins may have tried to start a new (unsuccessful) party. And Thatcher would probably not have won in 1983.

Because leadership is important. Tony Benn's constant refrain was that issues not personalities are what's important in politics. But he was wrong. People vote on personality, as we've just seen in this year's general election.

Labour lost because the electorate, having given Ed Miliband a cursory glance, didn't believe he was up to being prime minister. Just as, in 1981-83 the electorate didn't think that Foot was up to the job. It's not primarily about the policies, it's about character.