Brother, don't you walk away

Yvette Cooper's speech yesterday, in which she called on the government to respond more positively to the refugee crisis spilling over from the Arabic world, has rightly been acclaimed for its statement of basic humanity. But there's one bit that I think is a little misleading.

'Hungary and Sweden have had three times the number of asylum claims as Britain,' she pointed out, 'even though they are smaller countries.'

Well, yes, that's true, but is it relevant? Is land area the correct measure for the proper allocation of refugees? Other people have recently attempted to shame Britain by producing figures showing number of refugees accepted in relation to national population. And again, that doesn't necessarily seem relevant.

Personally, I don't think it's sensible or right to try to make such comparisons at all. Cooper's core argument is sufficient - that it's simply wrong to turn away from such a crisis: 'It's immoral, it's cowardly and it's not the British way.' This attempt to quantify our obligations is misguided.

Apart from anything else, if we are to draw up league tables, then neither area nor population is sufficient, since these don't confront the most commonly heard claim: that 'Britain is full'. If we're going to use a measure to compare countries, then surely the more appropriate method would be to factor in both area and population, by looking at density.

So I thought I'd post some graphs, to see if it helped at all. These are the population densities of the fifteen most populous countries in the European Union: 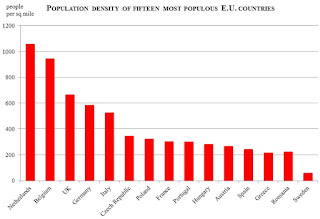 The UK is the third most densely populated of the major European nations, though it should be noted that there's a pretty steep fall-off after the top two. But you can see the pointlessness of Cooper's comment about Sweden: the geography of the place means it's not really comparable, so why compare?

If we then break down the constituent countries of the UK, you get this result: 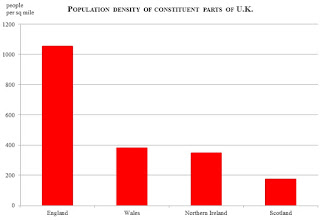 To put that in the context of the first graph: Wales and Northern Ireland would come between Italy and the Czech Republic in the top half, while Scotland comes in just above Sweden at the bottom. England, meanwhile, has almost exactly the same population density as the Netherlands, despite having an area more than three times the size.

But that's not really enough information either, because of the vastly disproportionate size of England compared to the others. So, breaking it down further, we can separate out the English regions and include them along with Wales, Scotland and Northern Ireland: 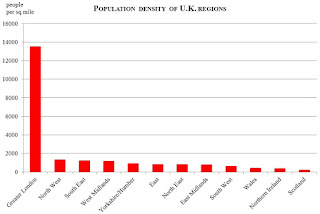 Which would suggest that London is somewhat skewing the figures. London really is full, while Scotland's virtually empty.

Apart from that, I'm not sure we get very far. As I say, I'm not convinced that these things help any discussion of immigration or asylum. Better to stick with Cooper's moral message: 'How can we be proud of our history of helping those who fled conflict if our generation turns its back?'
Posted by Alwyn W Turner at 9:00 am