I never met Marjie, but Harry was one of the nicest men I've ever known. He was a friend of the great Welsh writer John Summers, which is enough to recommend him for a start, and - apart from his TV and film work - he was also the stage designer for Joan Littlewood's Theatre Workshop in its early days.

And he knew Terry Nation, when Nation was a young comedian in Cardiff, which proved invaluable when I wrote a book on Nation's career. So much so that I dedicated the book to him and to the memory of John Summers.

Harry died in 2013 at the age of eighty-nine. This is him and Marjie in Round at the Redways: 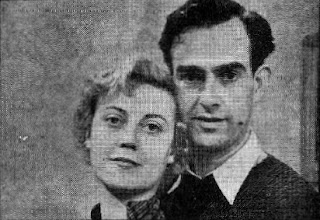