There are some Conservative MPs, supporters and commentators who have found the candidature of Jeremy Corbyn to be really too terribly amusing. They would be wise to stop their chortling. First because it comes over as smart young people bullying an old man, which is the kind of impression Tories shouldn't be giving. And secondly because Corbyn speaks for Britain much more convincingly than they do.

Just to be clear. Obviously I don't think Corbyn is going to win the leadership. Nor do I think he should - he'd be a disaster beyond the nightmares of Iain Duncan Smith. The electorate wouldn't accept him for a moment and Labour would be destroyed.

Forget policies, however, and the values he espouses are not too far removed from the image the British have of ourselves as a nation. When he talks of principles of fairness and equality, of community and public services, he resonates in a way that Ed Miliband never achieved.

To take a more obvious example: Tony Benn was adopted as the nation's sweetheart when it became clear that his politics were never going to be implemented, so we could simply bask in the warm glow of his values. Corbyn is no Benn - he lacks the charisma and the easy humour - but he's as close as we've got, and his status will be raised by this campaign.

He knows he's not going to win the poll, but there's another process going on at the moment, a quest for the soul of the party, and he's making his contribution to that. He may at least change the rhetoric, which would be a start.

Of the others, Andy Burnham still comes across as a lightweight, as does Liz Kendall - though presumably there's some grit there, given her determination to be a candidate when she has so little to suggest she's a leader. And the most convincing of the four was Yvette Cooper.

I commented on Twitter earlier this week that none of the four candidates would have made it into one of Harold Wilson's cabinets, and that none would become prime minister. I should like to amend that a little. Cooper would have done well in Wilson's time. At her age she'd only be a minister of state right now, but a cabinet seat would be confidently predicted for her in a few years' time.

On the other hand, I still can't see her - or any of the others - as prime minister.

But these are early days. The only thing we know about the 2020 election is that the Tories won't be led by David Cameron. Like most people, I think George Osborne will be prime minister and that he'll win the next general election. But all sorts of things can go wrong. What if the Tories are stupid enough to choose Boris Johnson as their leader? Cooper could beat him.

One other thing: I'm glad that Labour is finally getting round to thinking about the idea that sometimes leaders have to be removed. The Conservatives are wonderful at this - they even got rid of Margaret Thatcher when they realised she'd become a liability (which she had). At various times there was plotting in Labour ranks against Harold Wilson, Michael Foot, Neil Kinnock, Gordon Brown and Ed Miliband - and not one person was ever prepared to stand against any of them. It can't go on.

Oh, and one other, other thing: I am aware of the many criticisms of Jeremy Corbyn - and the Left more widely - about how his hatred of Israel has led him into bed with some deeply unpleasant political figures and groups. Those criticisms are entirely justified. But I don't think that, for the public, this will damage the impression of a decent, principled man. (Unless he actually began to look like a serious candidate, of course...)

And, because I like him, I would like to note in his defence that he was one of the few MPs who still came to the non-stop picket of the South African embassy back in the 1980s, even though the group who organised that demonstration had been expelled from the mainstream Anti-Apartheid Movement. I spent quite a lot of time on those pavements and his support was a very good thing. 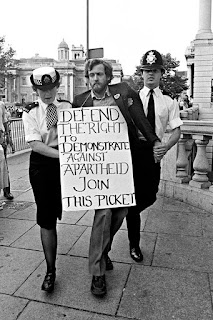