The Day of the Women

Now that Sandi Toksvig has finally left Radio 4's The News Quiz to put her energies into the Women's Equality Party, it's perhaps a good time to remember one of my favourite works of exploitation fiction: Pamela Kettle's The Day of the Women. 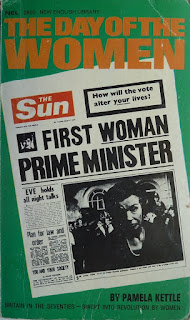 Published by the New English Library (who else?) in 1970, it tells the story of a new women-only political party called IMPULSE. The leader is named Diana Druce, and this is her telling her followers how to explain the party to their husbands:


Remind them that men have not found a way to lead this country out of trouble so far; that we have swung like a pendulum from crisis to crisis. In the past they have made war and even in victory have not known how to resolve peace. They have misused power over our economy and mishandled our international relationships. You know it is true. I know it is true. But we have to face up to the fact that your husbands are better informed politically than you are. They might confuse you with argument and you do not have the knowledge or experience to answer them back effectively. Not yet.

As the cover suggests, the party is instantly successful, sweeping into power at a general election. At which stage, obviously, the going gets a bit tougher.

It's not, to be honest, a great book, but maybe one day it'll earn itself a place in history as a prediction, forty-five years before the fact, of the inevitable rise of the Women's Equality Party.
Posted by Alwyn W Turner at 2:36 pm