Who gets my vote: part 1

I live in a very safe constituency. At the last election the Labour majority stood at nearly 10,000 votes; they were around eighteen percentage points clear of the Lib Dems. But that was a bad year for Labour (in 1997 they were forty-seven points clear) and a good one for the Lib Dems. The latter phenomenon is unlikely to happen again: last year Nick Clegg's party took a hammering in the council elections.

There may be some fall-off in support for Labour now that Frank Dobson's retiring - after all, he's represented the people of Holborn & St Pancras since the constituency was first created by the 1832 Reform Act, and presumably there are some people who liked him. But despite that, the party will certainly hold the seat.

Since it therefore matters not a jot who I vote for, I shall give the matter undue thought and consideration, candidate by candidate.

First up is the celebrity star of television debates and radio interviews, Natalie Bennett, leader of the Green Party of England and Wales (but not Scotland or Northern Ireland). 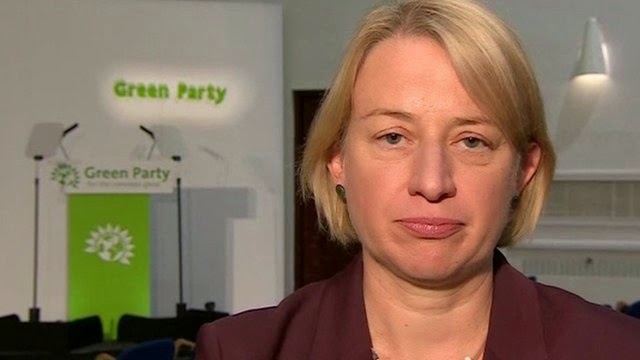 Bennett stood for the constituency last time round, when she came fourth with 1,480 votes (2.7 per cent). To put that in context, the previous Green candidate got twice that number of votes and saved his deposit with 8.1 per cent of the turnout. Bennett has also stood for the local council twice and once for the Greater London Authority, failing to be elected on any occasion.

Of course she wasn't leader of the party back in those days. But her performance in becoming leader doesn't give any reason to think she's much of a winner. In the Green Party leadership election, she got 1,300 first-preference votes. That's fewer people than voted for her in the general election, and that's in her own party. Even with the celebrity recognition factor, she'll do well to get above fourth this time.

The point of voting Green, though, is presumably not in the expectation of seeing them get more than one MP. It's to boost the national numbers in the hope that a sizeable vote for a party to the left of Labour might scare Labour into taking a stance that's a bit more radical (or progressive, as we now say).

That assumes, however, that we agree on what the word 'left' means anymore. Or indeed 'radical' or 'progressive'.

So I thought I ought to look at what the Green Party is proposing this time round, now that it's doing well enough to be patronised by the big parties.

And I have to start by admitting that I haven't yet read all eighty-four pages of the manifesto. I was going to do so last night, and instead found myself reading a history of I'm Sorry I Haven't a Clue, in the belief that it would bring me more pleasure. But I have read the education section of the manifesto, and thus far I'm not sure I'm entirely convinced.

The Greens say they want to get rid of league tables and Ofsted. On the following page, however, they boast about the GCSE and A-level results achieved in Brighton & Hove under a Green council; it's good to have this information and to know that grades are improving - which is surely the point of league tables. Furthermore '80 per cent of sixth forms and colleges are good or outstanding as judged by Ofsted'. Again it's nice to know that Ofsted does have its uses after all, but why no mention of how well the schools are performing for pupils in the years before sixth-form?

The manifesto calls for the abolition of grammar schools, academies, free schools, faith schools and private schools. Instead all schools will be comprehensives 'offering mixed-ability teaching'. There would be 'democratic accountability', with 'a key role for local authorities in planning, admissions policy and equality of access for children with special needs'.

Am I being picky in thinking that a genuine democracy might also allow for diversity? And that the Green Party - of all parties the one you might hope would be in favour of diversity - should recognise this.

Similarly there would be modifications of the curriculum, but no indication that that curriculum would be anything but national.

There is some scope for those who stray from the true path, however. Having abolished faith schools, there is a gracious concession that: 'Schools may teach about religions'. Which is nice. And there is promise of protection from 'sectarian attacks' for 'schools that serve particular [sic] vulnerable communities, for example, the Jewish, Muslim or Sikh communities'. My guess is that some members of those communities might see the abolition of faith schools by the Greens as a 'sectarian attack' in itself.

I'm not overly impressed by any of this. I distrust those with the arrogance to claim they have the one true answer, and I distrust those who believe that a single solution is applicable to all situations. I like plurality and a marketplace of ideas and options.

One more thing. The Green Party shares Tristram Hunt's obsession with 'qualified teachers'. The single best teacher I ever had wasn't qualified, but boy, could he teach maths. I, on the other hand, have a PGCE and very clearly I would be completely incapable of teaching in a school classroom, particularly one that required mixed-ability teaching. Because that's really difficult.

These 'qualified teachers', it should be noted, will have received 'comprehensive training ... on all diversity and inclusion issues'. There is, on must conclude, a diversity of opinions about what 'diversity' means.

I guess that what I want from the Greens is a big vision, an alternative to existing practice - some sense of, I don't know, environmentalism, for example. And the only element of such a thing in the education policy is a promise that school dinners won't be contaminated by the evil of GM. Oh, and some of the lessons should be held outdoors.

Apart from that it's just old-fashioned, centralised control by a big state. The man or woman in Whitehall still knows best.