Who gets my vote: part 2

Continuing my ruminations about who to vote for in the coming election, the Liberal Democrats in my constituency of Holborn & St Pancras are fielding Jill Fraser. 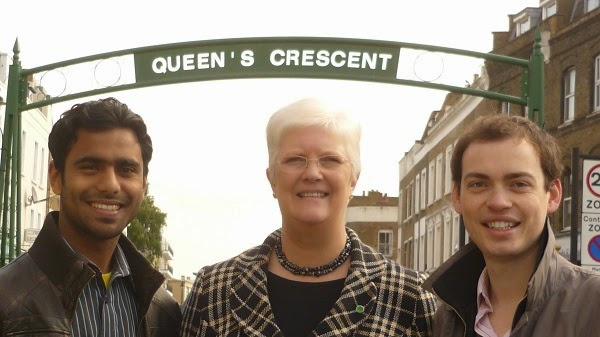 This is a good choice - Fraser (she's the one in the middle) is a popular figure. In 2003 she won a shock by-election to be elected to Camden Council (this was against the backdrop of the invasion of Iraq), and went on to become mayor of the borough in 2006. She stood for parliament in the Holborn & St Pancras constituency in 2005, achieving an 11 per cent swing from Labour to Lib Dem, and she's very active and visible in local campaigning.

Her son is a university lecturer (which is surely a good thing), but most famously she works in a local chip-shop and has done for over two decades. This is not necessarily the image conjured up by the words 'North London Liberal'.

She didn't stand in 2010, but the Lib Dem candidate came in second again, for the third election running. The candidate then, Jo Shaw, got a shade under 28 per cent of the vote. Even with the personal standing of Fraser, it's unlikely to get much better this time. Last year the Lib Dems were all but wiped out in the local elections, and Fraser lost her council seat (as did all but one of their candidates).

The reality, of course, is that it doesn't really matter who the candidate is. This is nobody's idea of a target seat (even assuming that the Lib Dems enjoyed the luxury of having target seats) and the party isn't exactly pouring resources into the constituency campaign. Fraser could promise free chips to every voter without it making any real difference.

I've long thought that the Lib Dems would do better in this election than was being predicted. And my reasoning was that they had quite a decent story to tell. Nick Clegg made the right decision in 2010 to enter a coalition government. Coalitions are what the party had been talking about for my entire adult life, and it would have been absurd to turn down the opportunity when it arose. Further, I have no doubt that the presence of the Lib Dems made the government a better one than it would have been had the Tories governed alone. Those were the two options that existed after the nation had voted, and we got the better of the two.

Now, though, I'm not so sure about the Lib Dem prospects. I think that as the choice between David Cameron and Ed Miliband becomes starker, there is a very real possibility that the Lib Dems will get squeezed. Clegg seems to me to be playing a limited hand pretty well, but for most of this campaign it's been as though the party hardly exists. No one appears to care in the slightest what they have to say.

And that's a bit of a shame, because I think the country benefits from having a moderately strong Lib Dem presence. It provides an alternative where none would otherwise exist, and it can sometimes spring a surprise. Eastbourne, for example, where the Labour Party stands no chance, was Tory for eighty years solid until the IRA murdered Ian Gow in 1990; now it's a Lib Dem constituency and likely to remain so.

I mean, obviously we have no idea what they stand for or what they believe. Lord knows they haven't actually been liberal for a long time, save for the occasional outbreak of concern over civil liberties. But believing in stuff isn't really their thing. Their job is to represent the don't knows. Which isn't intended as a criticism: there are an awful lot of don't knows, and they're entitled to have their uncertain voice heard, just as much as those who think they know everything.

And maybe I'm wrong about them being squeezed. Their best post-war performance came in 1983, in their incarnation as the SDP-Liberal Alliance. The country was then offered the choice of Margaret Thatcher or Michael Foot, and a very large number of people decided that they're rather have neither. The same could hold true for the party this time. Except that I don't think it will.

More than the state of the party at a national level, however, the problem for Jill Fraser is that she's rather wasted on Holborn & St Pancras. She'd make someone a good MP. But not us.
Posted by Alwyn W Turner at 8:16 am