One of the most striking aspects of British politics in the last twenty years has been the absence of a left-wing party.

With both post-Thatcher Conservatives and post-Foot Labour gradually shuffling towards the centre, space has opened up on either flank for new political forces. But there has been nothing on the Left, save for George Galloway and a feeble little Green growth in the last few months. Meanwhile the right has been very handsomely served. First by the Nick Griffin incarnation of the BNP, and then by Nigel Farage's Ukip.

In one sense this is entirely predictable. The British left has been fixated on incoherent, internecine squabbling since the 1970s and is clearly incapable of finding a popular voice. It can mount the occasional single-issue campaign but only in response to initiatives on the right: Rock Against Racism and the Anti-Nazi League in response to the National Front, the anti-Poll Tax campaign, the Stop the War Coalition. When it tries anything with a broader frame of reference - the Socialist Alliance, say, or the TUSC - no one really notices.

But in another way, the lack of a left party is a bit odd. Because my impression is that there is a left-of-centre consensus in Britain, waiting to be expressed and not finding itself articulated by the Labour Party. (It was there in the mid-1990s, had Tony Blair only recognised it.)

What has been missing, maybe, is the one overarching issue, the thing that catches the attention and encapsulates a wider view of society. Which is where the right has been so successful, of course, since it has, at its core, a deep dislike of immigration.

Why have right-of-Tory parties done comparatively well in the last decade? Perhaps these figures tell the story: 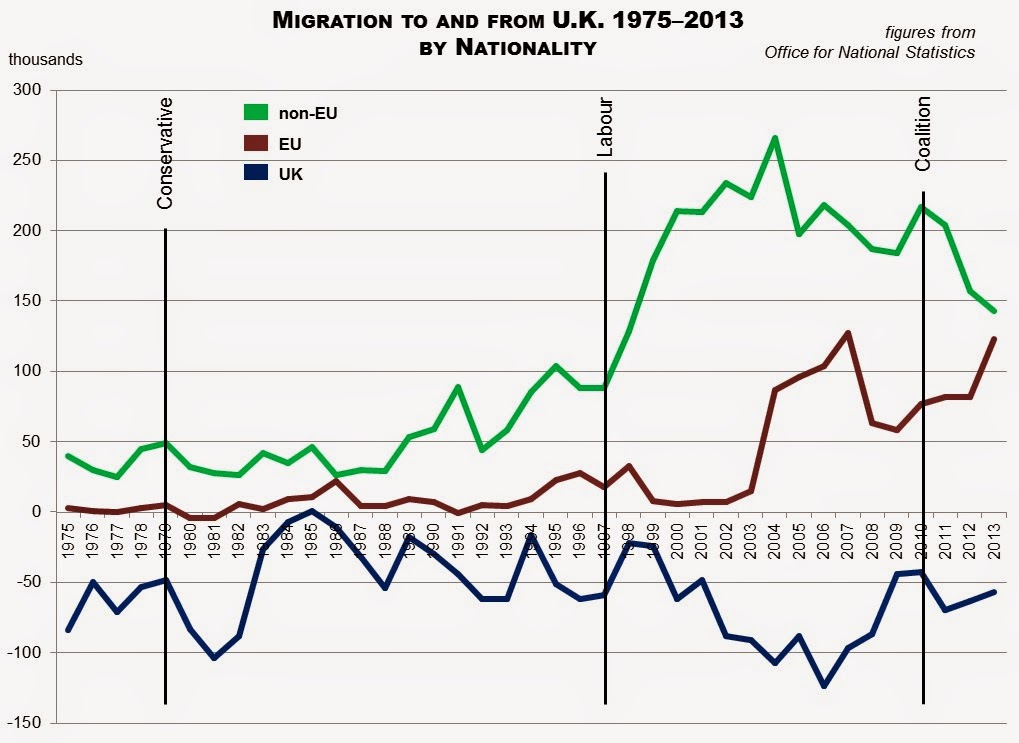 Put another way: If you add up the net migration figures for each of Margaret Thatcher's eleven years in power, you get a total of 26,000 people. If you do the same for each of the thirteen years of New Labour, you get 2.8 million.

But that's net migration. That might be relevant in terms of concerns about the capacity of the infrastructure to cope, but we all know that's not the real issue. The underlying concern is about culture and identity and about the number of foreigners. So, if you add up the total of the immigration figures in each of Thatcher's years you get 2.5 million people. And in New Labour years: 7.25 million.

These are not, of course, the numbers remaining at the end of each period. Many of those recorded entering the country (students, for example) stay for only a fixed time. But the figures have a certain, comparative function. The scale of immigration under the Labour government of Tony Blair and Gordon Brown really was quite exceptional, and - as far as I can see - there was, and has been, little attempt to explain the phenomenon.
Posted by Alwyn W Turner at 10:47 am