The slow death of representative democracy

This is a graph showing the number of votes cast in every general election since the Reform Act of 1932 (that's the blue line), together with the size of the electorate (the red line): 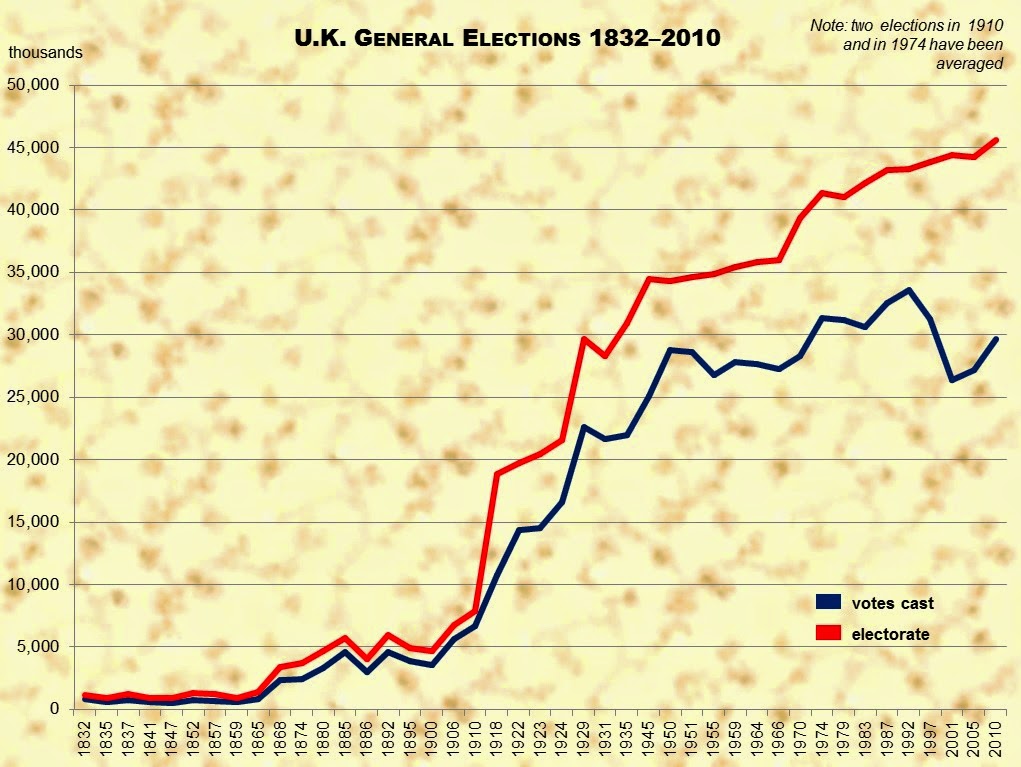 The growing gap between the two lines obviously represents declining turnout in elections. Which is something of a concern. In 2010 somewhere around 35 per cent of the registered electorate (that's well over fifteen million people) didn't vote. And beyond them, of course, are the millions who aren't even registered in the first place.

Nonetheless, this was a slight improvement on the previous election in 2005, when Tony Blair's Labour Party won 55 per cent of the seats in the Commons, despite securing the support of just under 22 per cent of the electorate.

More than this, though, I think the graph illustrates another - less discussed and more troubling - aspect of our politics. The electoral system simply wasn't designed for this many voters. In 1832 the electorate numbered around 1.2 million; now it's over 45 million.

Or, to put it another way, in 1832 an MP represented on average 1,787 voters. Today it's 70,160 voters. In the former case, there's a reasonable possibility that you can make your views known to your representative; in the latter, there isn't.

Marxists used to point out that quantity transforms quality. We now have a completely different concept of government from the one that was originally envisaged. And, judging by the turnout, and by the general lack of belief that politics is capable of changing the country, this is a system that is clearly not working.

As Peter Mandelson (himself a former Marxist) said in 1998: 'It may be that the era of pure representative democracy is slowly coming to an end.'
Posted by Alwyn W Turner at 10:09 am