Up the hill backwards

The Labour Party has 232 MPs. To form a majority in the House of Commons, a party needs to have 326 MPs. So if Labour is to win the next election outright, it needs to take an additional ninety-four seats.

Of the ninety-four marginal constituencies where Labour missed out most narrowly this year, eight are currently held by the SNP, three by the Liberal Democrats, two by Plaid Cymru and one by the Greens. The other eighty are all Conservative.

It would be simplistic to say that the party needs to win these ninety-four seats to form a majority government, because it assumes that there will no boundary changes (which there will be), and that Labour should target its efforts purely on existing numbers (which isn't necessarily the case). But still, it's a rough guide to the task ahead.

So the question is: How is Labour going to take a seat like Gravesham in Kent (no. 91 on the list), where the Tories currently have a majority of over 8,000? The Lib Dems and the Greens are irrelevant here - there are no votes to be squeezed out of them. So Labour would need to take votes either directly from the Conservatives or from Ukip, who are in a strong third place with a 19 per cent share.

All of these and many others - most of those on the list - are held by the Conservatives, with Labour second, Ukip third, and no one else in sight. Winning these seats is Labour's only path to power.

By comparison, the general election this year was so much easier. Some four-and-a-half million Lib Dem votes went missing from the party's 2010 total. Which makes it all the more shocking that Labour's popular vote only increased by around three-quarters-of-a-million. Next time it'll be far harder. 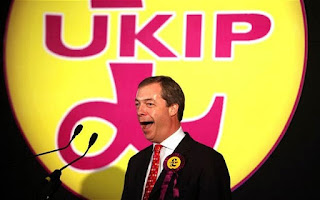 Some things will change before 2020, of course. Ukip support may well fall away in the next couple of years, depending on how the referendum goes, which would make their votes more easily available for someone. But this is far from certain. It may be that Ukip actually increases its strength. Or it may split. Their vote is the great unknown in electoral arithmetic, but my assumption is that there's a stubborn protest vote in there that's not going to end up with either of the major parties.

Somewhat clearer than the fate of Ukip is the fact that surely the Lib Dems will do better in the next election than they did this year. In a very marginal seat, this might help Labour, since it could reduce the Tory share. But more generally, the Lib Dems will be on the rise and will be competing with Labour for new votes.

Maybe majority government is too ambitious a target for Labour right now. Maybe a minority administration, with support from other parties, is as good as it could get. But the challenge is still the same: How does the Labour Party take votes from the Conservatives and from Ukip?
Posted by Alwyn W Turner at 8:41 am