Returning to 'the longest suicide note in history', the 1983 Labour Party manifesto raised a serious question: if those policies were so obviously doomed to failure, how did they get through the party machinery? It's a subject I addressed in my book Rejoice! Rejoice!


By this stage the Left had already suffered serious setbacks: the 1981 defeat for Tony Benn in the deputy leadership contest had been followed at the 1982 conference by a clutch of right-wing victories in the elections to the National Executive Committee.

Benn himself had lost the chairmanship of the NEC's home policy committee, which he had held for eight years and which had been the base of his power within the party. He had been replaced by John Golding, an MP who was also a senior trade unionist and very much on the right of the party - he was said to regard political theory as being 'in the same league as crossword puzzles'.

Which left a query about why the manifesto, this 'list of meaningless promises,' as Peter Shore called it, was so readily adopted by the new regime.

And the answer appeared to be that, along with most of the country, Golding realized that the election was lost even before the polling date had been announced, and had concluded that the strategic interests of the Labour Party were best served by blaming the defeat on the Left: 'why not lose it on Benn's terms and teach him a lesson?' as he said to Roy Hattersley.

I was reminded of this episode when reading Dan Hodges in the Daily Telegraph, arguing that Blairites should vote for Jeremy Corbyn because 'it's time to call the Left's bluff'.

And it might be worth remembering that the defeat of 1983 was followed by fourteen years of opposition. 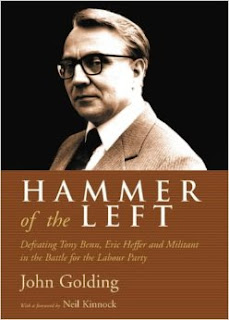