Why don't you do it again?

Following Labour's  massive defeat in the 1983 general election, the party began the long, painful march back to electoral success. A new leader, Neil Kinnock, was elected, senior figures stepped back from the front-line, and policies associated with the 1983 manifesto began gradually to be dropped.

And, just fourteen years later, the Conservative Party was finally removed from government.

The election defeats in 2010 and this year are not on the scale of 1983. Not quite. But there are, I think, echoes of the 1980s to be heard. In particular, there is an attitude within Labour that harks back to that long period of opposition.

In my book Rejoice! Rejoice! (available in paperback from all good retailers), I argued that the radicalism of Margaret Thatcher 'threw the left on the defensive, so that the Labour Party seemed constantly to be fighting rearguard actions, seeking to protect a status quo from which support was fast draining away.'

Every change made by the government, I said, was 'opposed until it had been implemented and had been seen to win popular approval, at which stage Labour accepted it. The impression given was that the party was hidebound and dogmatic, and yet paradoxically lacking in principle.'

And that, I fear, has been the impression that the party has again given in recent years. Because, under David Cameron, the Conservatives have rediscovered a Thatcherite zeal for reform, and Labour still hasn't worked out how to respond.

Those on the left often cite the achievements of Clement Attlee's government, the great changes that were wrought even at a time when the nation was in massive debt and struggling to cope with the aftermath of the Second World War. Against all the odds, and against conventional political wisdom, a new world was built. 'We were, as Winston Churchill said, a bankrupt nation,' reflected Nye Bevan, 'but nonetheless we did these things.'

The same may one day be said of Cameron's governments. In the face of a huge economic recession, the coalition set about the radical restructuring of the NHS, of education and of the benefits system. And Labour's reaction has been, as in the 1980s, simply to oppose every change that is mooted, to denounce it as unnecessary, vindictive and wrong, possibly evil. After which, the truth is gradually acknowledged - too late to be of any use - that maybe change was necessary after all.

Put another way: If a Labour government were to be elected in 2020, how many of the Tory reforms to education and welfare would it actually reverse? Precisely.

As acting leader, Harriet Harman (elected to Parliament in 1982) has at least tried another tack: of accepting large swathes of the government's benefits agenda as soon it was announced. Inevitably this has caused some tension in the party, with both the front-runners for the leadership - Yvette Cooper and Andy Burnham - distancing themselves from her approach.

They're probably right to do so. Apart from any question of morality and principle that Labour might wish to articulate, this isn't normally a successful political course to steer. When in opposition, the cry of 'me too' does not tend to get heard, no matter how loud you shout. This is particularly the case in the immediate aftermath of an election defeat, when no one is listening.

But there is an alternative. It starts by recognising that change is necessary, that there are no sacred cows and that things are going wrong. Which can be controversial, but shouldn't be.

To suggest that the NHS is failing to deliver the service that it should deliver is not the same as demanding that we abandon the institution entirely. It's merely to point to an obvious, if not often articulated, truth: the NHS isn't good enough. It really isn't. Its efficiency and patient care could be considerably improved, and the public has a right to expect better.

When William Beveridge and the other great reformers of the 1940s set out to change society, they identified the five giant evils as squalor, ignorance, want, idleness and disease. Progress has been made, but you'd be hard pushed to claim that these giants have been slain.

Reform is necessary and inevitable. But by simply adopting a defensive position, Labour has - in the post-Attlee years - chosen not to participate in shaping that reform.

There have been exceptions, of course. There was James Callaghan as prime minister, for example, launching his great education debate in the 1970s, though it was a subsequent Tory government that actually made all the running, culminating in the Education Reform Act of 1988. Better yet, there was Frank Field, with his thinking-the-unthinkable transformation of the welfare state, which Gordon Brown point-blank refused to fund.

That latter case illustrates Labour's problem. If the entire system of benefits needed to be re-examined - and it did and does - then it's important to have the Labour Party coming up with some ideas. Because if it doesn't do so, then it simply hands over the whole thing to the Tories to make whatever changes they deem necessary. And the Conservatives may not have the same priorities. Which leaves Labour bleating on about Iain Duncan Smith's 'hated bedroom tax'.

The problem with not accepting the need for change - and therefore failing to initiate new thinking - is that it passes the agenda to your opponents. And it can take an awfully long time to recover from that.

I don't know if you remember Ed Miliband's speech to the 2011 Labour conference. Possibly not, though it was said to be enormously significant at the time: 'the most radical analysis of Britain's plight offered by any Labour leader since 1945,' according to the post-match punditry of Patrick Wintour in the Guardian. It was the speech that was going to reframe the public debate of capitalism, with its distinction between predators and producers.

But perhaps the most striking section of that speech was when Miliband dwelt on the past. There had been speculation that he was going to apologise for the mistakes made by the last Labour government. But he had much older fish to fry. 'Some of what happened in the 1980s was right,' he told conference. 'It was right to let people buy their council houses. It was right to cut taxes of 60, 70, 80 per cent. And it was right to change the rules on the closed shop, on strikes before ballots.'

Thirty years on, and Labour was still trying to get over its failed strategy in the 1980s. Before straightening its tie and going out to make the same mistakes all over again. 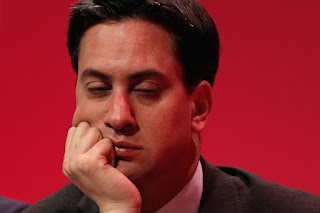