I've been absent from this blog for over a week, largely because I've been busy writing. Which is going very happily, thank you.

In addition, I seem to be getting a bit of book reviewing at present. My review of Charlotte Higgins's rather fine book on the BBC is here.

I also had a trip to Blackpool, as mentioned earlier, which was very enjoyable and introduced me to a musician of whom I had never previously heard. Leo Chadburn soundtracked the movie at the centre of the exhibition in the Grundy Art Gallery, and he closed proceedings with a performance of a piece inspired by the correspondence between Margaret Thatcher and Ronald Reagan. It was fabulous, almost touching the genius of Scott Walker at times - and by that, I obviously don't mean the melodic Scott Walker, but the creator of Tilt and The Drift.

Leo Chadburn also performs under the name Simon Bookish and I'm gradually exploring his work. This album, Everything/Everything, in particular, is stunning, like the Decca-era David Bowie covering Slapp Happy's Casablanca Moon, accompanied by the Fires of London. (There's one for the teenagers.)

This is Mr Chadburn/Bookish, wearing a shirt that Robyn Hitchcock would have been proud of in 1985: 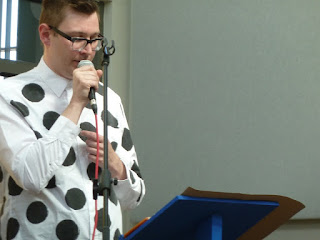