It's so strange the way he's talking

I think I should record the fact that I'm really, really enjoying the Labour Party leadership election.

Which is a bit odd. Because so far there has been not a single memorable moment, and because the candidates are so poor. I've written elsewhere about the best slate of candidates in a Labour leadership election, but this is surely the worst; there was more talent on display in 2007, and there was only one name on the ballot paper then.

But the whole thing's been transformed by the arrival in the spotlight - reluctant, blinking, bewildered - of Jeremy Corbyn, the longest serving member of the Left's chorus-line. Unheralded by the critics, never even an understudy, he's somehow turned a school nativity play into a hit show.

Or, more accurately, into part of a hit series, one more episode in a longer running story about the public's dislike of the political establishment. 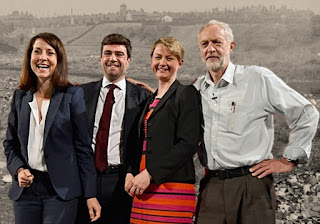 If we were to date the start of this story, I think we'd go back to the elections of Martin Bell in 1997 and of Richard Taylor in 2001 as independent MPs. Bell was ably assisted by the Labour machine, so perhaps he doesn't really count, but certainly Taylor - who took the safe Wyre Forest seat from Labour on a Health Concern ticket - was a shot across the bows of the establishment. As I wrote in A Classless Society: 'At a time when political parties were losing support at an unprecedented rate, they could not afford to ignore the spectacular success of a genuine independent.'

Then there was the election of Respect's George Galloway as the member for Bethnal Green and Bow in 2005 and Bradford West in 2012. This year, of course, Galloway emulated Shirley Williams's unenviable record of losing a seat at two successive general elections, but meanwhile the Scottish National Party was gleefully sweeping the board in Westminster.

In between, there was the brief flurry of Clegg-mania in 2010 and, more significantly, the spectacular rise of Ukip. It may only have one MP, but the vote Ukip achieved in the general election was substantial: 3.9 million people turned out to support the party, more than the Liberal Democrats and the SNP put together. I think it's reasonable to point out that many of those people were voting in anger at the failings of the other parties, rather than to express their total support for Ukip's platform.

And now we have the Corbyn insurgency. Napoleon once said that every corporal carried a field-marshal's baton in his knapsack, but no one realised that his comments should be taken literally.

Every one of these developments since Wyre Forest seems to have come as a complete shock to the Westminster commentators. And partly this is because the new political class and the media have become as one.

There's always been an overlap between politics and media, but since the 1990s it has reached absurd proportions. Michael Gove, Boris Johnson, Ed Balls, Yvette Cooper - all of them journalists or ex-journalists. It feels as though the two groups have interbred to the point of imbecility, and are now apparently unaware of anything happening outside the Strangers' Bar and a handful of decent restaurants within earshot of the division bell.

With some honourable (sometimes very honourable) exceptions, political commentary has descended into a kiddies' Kremlinology, with little titbits about whether George Osborne has the tactical upper-hand over Theresa May in the race for the Tory succession.

The Blairite-Brownite saga was the model, a dispute that was rooted entirely in ego. 'There is but a cigarette paper between the politics of Brown and Blair,' Polly Toynbee wrote in 1996, but 'most of politics is far more about personal rivalry, jealousy and suspicion than usually gets reported.' Now that's pretty much all that gets reported.

And then, from time to time, the cosy consensus is disrupted by the public demanding that their voice be heard as well. And those interruptions to business seem to be turning up with every greater frequency.

So we have the hugely entertaining spectacle of columnists trying to work out why anyone would take Corbyn seriously. He's not part of the inner circles. He's not a player. He is, on the other hand, a man who's been on virtually every demonstration for the last thirty-five years (or on the counter-demonstration if the original one wasn't appropriate). He may not have figured in the media very much, but his long service is known and admired by a great many of those who will vote in the leadership election.

Corbyn represents the outsider at a time when insiders are deeply unpopular. A vote for him is a vote against the establishment (however loosely or widely that is defined). Just for the record, I still don't think he's going to win the leadership, but then the SNP didn't win the independence referendum last year and it didn't seem to do them much harm.

And talking of referendums, that's the next episode waiting to be written in the story of Britain's disillusionment with Westminster. At some point in the next two years (sooner rather than later, if the reports are to be believed), the political class is going to have to put itself up for approval by the population of the country. The ostensible issue is our membership of the European Union, but it'll be surprising if that's the sole item on the agenda.

Now that one's going to be really enjoyable.
Posted by Alwyn W Turner at 1:48 pm