Who gets my vote: Part 5

So finally, having looked out the Tory, Lib Dem, Green and fringe candidates for the constituency where I live, Holborn & St Pancras, I come to the person who will - barring acts of God - become the next MP. And that person is the Labour Party's candidate, Keir Starmer. Or Sir Keir Starmer, as he became last year.

Now Starmer starts with a slight advantage, as far as I'm concerned. I've got used to the idea that people offering themselves for the highest political office are younger than me (I once wrote an e-book on the subject). But Starmer was born just six months after I was, which is well within the margin of error.

According to a profile in the Guardian a decade or so back, he was born into a working-class family in South London and went to Reigate grammar school, where he had violin lessons alongside Fatboy Slim. His parents, after retiring, ran a donkey sanctuary.

He made his name in the 1990s as a defence lawyer, specialising in civil rights and representing everyone from the families of British soldiers killed by 'friendly fire' in the Kuwaiti War, through to Arthur Pendragon. (The latter, in case you've forgotten, was the official sword-bearer of the Secular Order of Druids and was accused of trespassary assembly at Stonehenge on the summer solstice.)

He was also involved in the epic McLibel case, and acted for Death Row prisoners in the Caribbean. In 2000 he was named Human Rights Lawyer of the Year by the two pressure groups Liberty and Justice.

In 2008 he became Director of Public Prosecutions. The Daily Telegraph called his appointment a case of 'poacher turned gamekeeper'; the Guardian said it was 'bold' (resisting the temptation to add 'very bold', in approved Jules and Sandy manner); while the Sun summed it up with the headline: 'New prosecutor defends paedos'. He left office five years later, and was subsequently selected as the Labour candidate for Holborn & St Pancras. 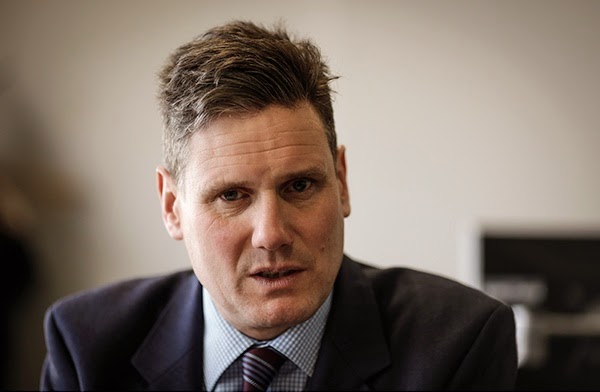 All of this is perfectly sound; you might say impressive. And the man even lives in the constituency. So why am I suspicious of Starmer?

Well, Wikipedia points out that as DPP he was responsible for the non-prosecution of the police officer involved in the death of Ian Tomlinson, and was subsequently keen on pursuing the Twitter Joke case. But I don't think that's the real cause of my distrust. Those decisions certainly besmirch his image as a liberal lawyer (Judge John Deed wouldn't have made them), but his broad record as DPP stands scrutiny with pretty much anyone else's.

No, I think my problem comes from a feeling that he is at heart a believer in the state as the solution to our woes. This is characteristic of many civil rights lawyers; a sense that they are the guardians of truth, freedom, progress, and that these things are therefore determined by action from the top down.

Or perhaps my problem is that he represents the new-look Labour Party. 'Labour has changed, with just 13 per cent of our MPs from skilled manual backgrounds,' said the union leader Ken Jackson in 1999. 'Barristers, academics and doctors have taken their place. Parliament is fast becoming the preserve of the professional.'

In Andy McSmith's excellent book Faces of Labour, he recounts the story of Tony Blair being introduced to Greg Dyke in 1983, at a time when Blair was looking for a safe constituency to fight. Dyke's response was: 'Not another fucking London barrister!'