'On immigration and Labour's trade union link, Ed Miliband's leadership actually represented a shift to the right from the Blair years,' wrote Owen Jones in the Guardian last week.

Certainly as far as immigration goes, he's perfectly correct. But then, in purely political terms, perhaps Miliband was right to move the party's position.

In 2004 eight East European countries (plus Malta and Cyprus) joined the European Union, the largest enlargement the organisation has ever experienced. This was the occasion when the likes of Poland, Hungary and the Czech Republic joined, and the occasion that sparked a steep rise in immigration into the UK from European countries. 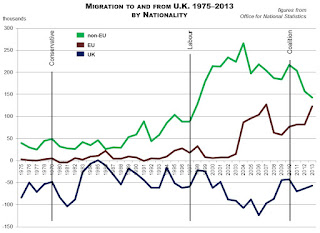 The then prime minister, Tony Blair, was enthusiastic about the arrival of the new member states. This was, he declared: 'A good day not just for Poland, Latvia and Cyprus, but also for Peterborough, Leeds and Carlisle.'

So how did that work out politically? Well, the good news is that Labour still holds four of the five parliamentary constituencies in Leeds. But the fifth - Leeds North West - fell to the Liberal Democrats in 2005, and has been retained by them ever since.

Meanwhile both Peterborough and Carlisle, which were held by Labour at the time of Blair's comments, have fallen to the Conservative Party, in 2005 and 2010 respectively.

From a Labour Party perspective, that seems to be the problem with the public - they don't appreciate what's good for them.
Posted by Alwyn W Turner at 3:41 pm