Today is the sixtieth anniversary of the founding of Black Sash, one of the most inspiring campaign groups in modern history. 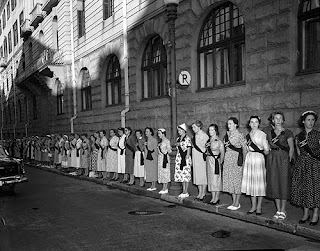 Back in 1955, the National Party government of South Africa was extending the implementation of apartheid, and Black Sash was formed to resist constitutional changes that were intended to entrench white rule; hence its original name of the Women's Defence of the Constitution League.

The women who became involved over the ensuing decades were predominantly white, middle-class and English-speaking. Therein lies part of the reason why they're so inspiring. From a position of privilege, they had everything to lose. There was personal risk for them in attracting the attentions of the police and the authorities, and no material benefit in the change for which they campaigned.

But mostly Black Sash are so impressive because of the tactics they adopted. Initially their impact came in the silent witness they bore, as seen in the photograph above, haunting the public appearances of politicians, their black sashes a symbol of dissent, their silence the sound of defiance.

Their campaign attracted international attention almost from the outset. Here's an early account from the Manchester Guardian sixty years ago:


Their technique is to stand solemnly and silently at any gateway through which a minister has to pass. They bow their heads. They wear a black sash across their body. Everything about them is sombre and cheerless. Then when the minister arrives they still do nothing. But they do it more emphatically. Consequently their dour appearance tends to introduce a mournful gloom into whatever is going on.

Later, placards were carried, still in silence, as the women drew attention to specific cases of abuse and protested against the evils of apartheid more generally. Most powerfully these demonstrations were staged outside courtrooms, insisting that justice be seen to be done. 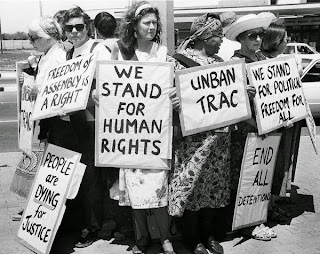 Meanwhile a network of offices was being built across the country, providing support and advice for those suffering under apartheid, as the government's attempts to suppress freedom grew ever more violent. Political witness was augmented by practical assistance.

Black Sash was also, for many both inside and outside South Africa, one of the few sources of reliable information about the realities of what was happening in the country. Its testimony was sufficiently powerful and authoritative that eventually the government banned newspapers like the Sowetan and the Weekly Mail from even quoting the organisation.

As the struggle intensified in the last desperate years of National Party rule, so the group's work became ever more vital. In the words of one activist: 'It's inspiring and it's heartbreaking. We're living history every day.'

In the post-apartheid era, Black Sash continues to campaign for human rights and for progress. Because the struggle is not yet over. As their website explains: 'South Africa cannot be free as long as the majority of its people continue to live under conditions of deprivation and injustice.'

Nelson Mandela called them 'the conscience of white South Africa', which is a pretty fine compliment. Even so, I hesitated before quoting it, because - in Britain at least - the fight against apartheid has been so personalised that it sometimes feels as though Mandela were solely responsible for the overthrow of the system.

In the process, the contributions made by others - and by organisations other than the ANC - are all too often overlooked. To help rectify that, might I suggest a visit to the Black Sash website? 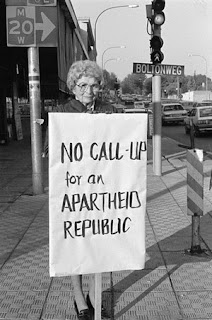