Will no one rid us of this tedious pundit?

'The Tories who witnessed the Major years still bear some scar tissue,' writes Simon Heffer in the New Statesman, as he commences his analysis of the new government's position.

Well, yes, and much of it was inflicted by him and others in the supposedly loyal Tory press, still worshipping at the shrine of the fallen idol, having never got over the emotional shock of witnessing her departure from Downing Street. When John Major was told during the 1992 election campaign that the Conservative Party was six points behind Labour in the opinion polls, he replied: 'Of those six points, three are the fault of Simon Heffer and the other three are Frank Johnson's fault.'

Heffer was then the deputy editor of the Daily Telegraph and the relentless sniping from that newspaper and from the Daily Mail did a huge amount of damage to Major's government. It'll be interesting to see how much they've learned from the experience.

Meanwhile, though, I do wonder why any publication continues to pay Heffer money for his views, given how ludicrously inept his assessments are. I know most commentators, having spent far too long reading opinion polls, called the recent election wrong, but Heffer is way beyond that. He is willfully blind to reality, his perception distorted by dogma in a way that would have caused embarrassment to a member of the Workers' Revolutionary Party in the days of Gerry Healy.

In May last year, following the European elections, Heffer wrote about the urgent need for the Tories to form an electoral pact with Ukip. In constituencies such as Nigel Farage's promised land of Thanet South, he said, 'there is nothing to be gained by putting up a novice candidate against him'. Foolishly, the Conservative party ignored his wise advice, fielded their own candidate and, er, won the seat.

Heffer's article concluded: 'If the Tories have any sense, they will start talking about such an arrangement now. For if, next week, Ukip wins the Newark by-election and the Tories descend into panic, David Cameron might find himself with no other option.' Needless to say, the Conservative Party won the Newark by-election, with a handsome 7,400 majority. In the general election, they increased that to 18,500, with Ukip beaten into third place by Labour.

But the great sage was undeterred. He still knew better, and mere facts weren't going to get in his way. This is him in August last year. 'Although they [the Tories] have doggedly refused to entertain the idea, they will have to consider an electoral pact with Ukip, or face at least five years out of government.' Consequently, 'the party's grandees will, I am convinced, make a humiliating U-turn.'

If David Cameron would only reach out to Ukip, 'he wouldn't just keep himself in Downing Street, but would reunite a conservative coalition - which, I am sure, is really what the country wants.'

All that certainty, all that absolute self-confidence, all that nonsense.

But then this is the man who backed John Redwood's bid for the Conservative leadership in 1995. He has been consistently wrong for over twenty years now. Why is he still considered employable? 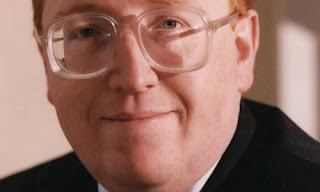