Who gets my vote: the final verdict

Having checked out the claims of the various candidates in my constituency - Labour, Tory, Lib Dem, Green and others - I find I still have to make a decision about who to vote for.

Ed Miliband tells me to put my family first when voting. Well, my parents are retired and have had a better deal on their pensions from the coalition than from the last Labour government. (You may remember Peter Mandelson saying there was 'no mileage' to be gained from chasing the pensioner vote.) And my brother will be hit by the mansion tax.

On the other hand, Miliband adds that, as prime minister, he would 'put working families first'. So it doesn't sound as though there's much there for those of us who are childless.

And indeed I know perfectly well that my taxes will go up. But that's regardless of who gets in. Even before we get round to paying for those election bribes, current expenditure has to be funded and no one really believes that the shortfall is going to be made up by investment bankers and Starbucks.

I like the argument put forward by Russell Brand and, more coherently, by Owen Jones that: 'Campaigners can put pressure on the Labour leadership, and they can extract concessions that could transform lives'. But that does assume that campaigners are on the 'right' side. And photographs of a gender-segregated public meeting for the Labour Party (in Britain, in 2015) suggest that that's not necessarily to be taken for granted. Miliband's susceptibility to pressure may simply be weakness.

In any event, this position implies that 'this time' we must vote Labour in order to keep out the evil Tories.

I've heard this argument in every general election since I became entitled to vote. But this time it feels as though the two-party state is teetering on the brink of collapse, and I'm inclined to think that this is the key issue, since most of the parties as they currently stand are close to being meaningless.

The existence of the SNP and Plaid Cymru make sense; none of the others do. It's time to change the system of representative democracy, and to start again. Proportional representation would at least be a start.

Maybe this isn't an occasion for short-term calculation.

I should add that I'm not a card-carrying member of any political party (though back in the 1980s I did once stand in a council election for the Humanist Party), so I have no direct calls on my allegiance. As a pompous self-proclaimed historian, I think this is probably a good thing.

I do, however, have a loyalty, an interest that I ought to declare. I once wrote the election manifesto for one of the established parties. But not because I was a member - just because I was a jobbing writer.

So - full disclosure, as journalists like to say - back in 1996 I was asked to write As Sutch: The Political Manifesto of the Official Monster Raving Loony Party. 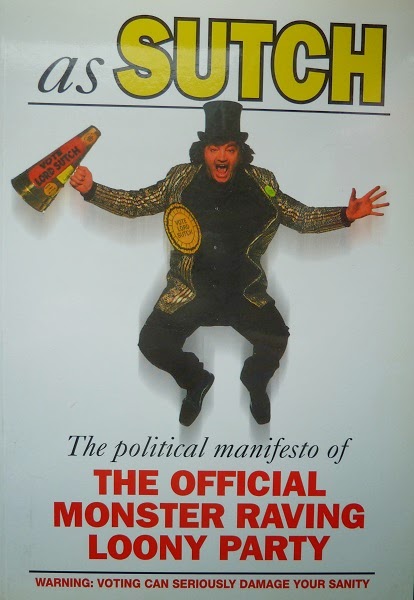 Much of this was based on Screaming Lord Sutch's previous press releases, and with the passage of time I've now lost track of which bits were mine and which were existing pledges. The Flying Squad being equipped with Space Hoppers - was that my idea? The introduction of selection and streaming to evening classes? The building of pram lanes?

I'm fairly sure that the abolition of Jeffrey Archer, Damien Hirst and Mystic Meg were my suggestions. And fixing the minimum wage and the state pension at 100 per cent of an MP's salary. And making it illegal for adverts to use the sound of doorbells and telephones ringing.

Certainly the running gag about Tony Blair going bald, the questioning of whether Vinnie Jones really was Welsh, and the jokes based on scurrilous (and untrue) rumours about Michael Portillo and Peter Lilley - I'll hold my hand up to those ones.

The idea of the publisher, McNaughty Books, was to exploit the coming general election campaign to get some sales on a joke gift-book. It didn't work. Lord Sutch's beloved mother fell and broke her hip in March 1997, and he withdrew from the election in order to nurse her. 'The is the first time I have missed a general election,' he said, 'but when you have family, they come first.'

He did contest two further by-elections later in 1997, taking his total number of candidacies to forty, but his heart wasn't really in it. His mother died the following year and, unable to cope with the ensuing depression, Sutch committed suicide in 1999.

The Official Monster Raving Loony Party survives, but it's not fielding any candidates in my constituency, so I can't vote for them. Unless I spoil my ballot paper by adding their name to it...
Posted by Alwyn W Turner at 9:08 am