I was looking through some old newspapers yesterday, and stumbled across the Guardian's coverage of Ed Miliband's debut as Labour leader in 2010.

You'll remember that Miliband was elected at the start of the conference week that September, and that a couple of days later he made his first big speech in his new role. The paper invited various figures to comment on the speech:

Tony Benn: 'I supported him for leader, and he's justified my every hope.'

Roy Hattersley: 'Ed Miliband made the speech which, for years, I have wanted a Labour leader to make.'

Jenni Russell: 'The party has chosen the right man. David Miliband could not have spoken like this.'

Seumas Milne: 'This is a long way ahead of Brown, let alone Blair. It also reflects the mainstream centre of public opinion.'

Polly Toynbee: 'Here was a fresh tone of honesty and authenticity ... This was grownup politics.'

Derek Simpson: 'His clear support for the vital role of trade unions is welcome. It has been too long since we heard a Labour leader speak in those terms.'

Anne Perkins: 'warm words, priorities that any progressive would welcome, and no convincing narrative to show what he wanted to do with them.'

Norman Tebbit: 'He had been well rubbed down with snake oil.'

Martin Kettle: 'a political ecumenism which indicates that Miliband's Labour would be seriously open to a centre-left coalition if and when the chance comes.' 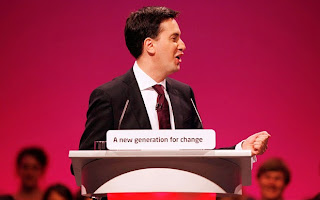 Elsewhere, the Independent ran a similar, though less impressive, feature, with comments from Jim Murphy: 'He ensured Labour would remain in the mainstream... He is a serious, deep politician.' And from Dave Prentis: 'These first steps towards refreshing the party are a giant leap towards reconnecting with voters.'

To add to the picture, here's Kevin Maguire in the Daily Mirror: 'His freshness allowed him to pose as the optimist without appearing to be silly.' While the Sun reported Ken Livingstone: 'It was excellent. The only leader's speech in thirty years when I've agreed with every word.'

And some other newspaper comment. The Daily Telegraph leader concluded: 'Labour may yet rue the day they picked the younger Miliband.'

Daniel Finkelstein wrote in The Times: 'The more this week that Mr Miliband has said that he gets it, the less I have believed that he does. The more he said he "understood" voter concerns (rather than shared them) the more I wondered whether he really does.'

Finally back to the Guardian, this is Deborah Orr, writing two days on: 'The first time I watched Ed Miliband's speech to the Labour conference on Tuesday I felt soothed, even grateful. I'd waited a long time to hear a Labour leader say such things after all. Then every time I saw a clip of the speech, that clip seemed slightly absurd... New Labour was a tragedy. New Generation Labour, I'm afraid, seems farcical to me already.'
Posted by Alwyn W Turner at 7:22 am