The mystery of the three million

One of the central concerns about Britain leaving the European Union is that it will put British jobs at risk. How many jobs, precisely? Or, if not precisely, then at least roughly?

For clarification on this burning issue of our time, naturally I turned to the acknowledged expert on economics in modern politics, the man who spent ten years as chancellor of the exchequer before becoming prime minister.

During the 1997 election campaign, Gordon Brown warned that divisions and uncertainty in the Conservative Party threatened 'the three-and-a-half million jobs that relied on Europe'. But that seems to have been an over-estimate, because four years later he was arguing that 'over three quarters of a million UK companies trade with the rest of the European Union - half our total trade - with three million jobs affected'.

So it's three million? Yes, that must be right. Because that was the figure Brown was still citing in 2005, and then again in the 2010 election campaign: 'Three million jobs depend on our membership of the European Union.'

And in March this year, Brown made the same point: 'We must tell the truth about the three million jobs, 25,000 companies, £200 billion of annual exports and the £450 billion of inward investment linked to Europe.'

(Incidentally, that '25,000 companies' is a bit worrying, don't you think? In 2001 it was 'over three quarters of a million companies'. What on earth has happened to our economy?)

Coming back to those three million jobs, though. It's not just Gordon Brown who quotes this figure. It's bandied around all the time by those who support British membership of the EU. It was quoted, for example, by Tim Farron on Question Time last night.

But I'm no economist, and there's something I don't fully understand. We had, we were told, the longest period of uninterrupted growth in our history, followed by the worst recession in living memory, and then a recovery that's either the envy of the developed world or a fragile property-fuelled bubble (depending on taste).

Things have changed so much. Back in 1997 we had around 26 million people employed in Britain. Now it's over 30 million.

And yet somehow, inexplicably, the number of jobs dependent on the EU doesn't seem to have moved an inch in all that time. It didn't go up in the good times; it hasn't come down with all the problems in the Euro-zone.

It just sits there, unchanging and - perhaps more to the point - unchallenged. Puzzling, isn't it? 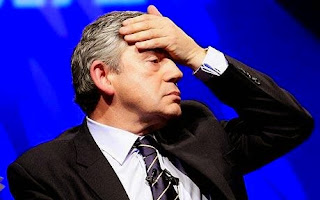