Revealed: those British values in full

The new government has wasted no time in announcing that it's going to crack down on 'extremism'. Yesterday David Cameron said that it's time to end a culture of 'passive tolerance', in which people have been allowed to think that: 'as long as you obey the law, we will leave you alone.'

Now, we're told, the state should become more interventionist in its promotion of 'British values'.

We've been here before, of course. Back in 2011 Cameron made a speech on exactly the same lines: 'Frankly, we need a lot less of the passive tolerance of recent years and much more active, muscular liberalism.'

It would appear from this that Cameron really has no idea what the phrase 'passive tolerance' means. Maybe his advisers think they've coined it themselves, and are seeking to echo 'passive smoking', in the same way that 'muscular liberalism' echoes 'muscular Christianity'.

But what are these British values that we need to defend with such non-passive muscularity? The following definitions and checklists of Britishness are all quoted in Richard Weight's magnificent book Patriots: National Identity in Britain 1940-2000 (available in paperback).

Michael Balcon, head of Ealing Studios, said in 1945 that his films tried to promote: 'Britain as a leader in social reform, in the defeat of social injustices and a champion of social liberties; Britain as a patron and parent of great writing, painting and music; Britain as a questing explorer, adventurer and trader; Britain as a the home of great industry and craftsmanship; Britain as a mighty military power standing alone and undaunted against terrifying aggression.' 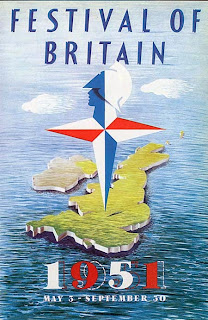 The Festival of Britain programme in 1951 celebrated: 'the fight for religious and civil freedom [and] the idea of parliamentary government; the love of sport and the home; the love of nature and travel; pride in craftsmanship and British eccentricity and humour.'

T.S. Eliot in 1948 suggested: 'Derby Day, Henley Regatta, Cowes, the Twelfth of August, a cup final, the dog races, the pin table, the dart board, Wensleydale cheese, boiled cabbage cut into sections and the music of Elgar.'

Anyway, the truth is that our values are not in the gift of government. We decide them for ourselves.
Posted by Alwyn W Turner at 8:09 am