The challenge for the next Labour leader (in 1992)

The general election last week is widely said to be reminiscent of 1992. So what were the papers saying at the same stage back then, eight days after John Major's shock result, when the Labour Party was looking for a new leader?

This is how The Times started its editorial on 17 April 1992:


Can Labour Win? and Must Labour Lose? were the titles of two bleak books published in 1960, after Labour had lost three elections in a row. Now the same questions are being asked after a run of four defeats.

In language that might well sound familiar, the editorial continued:


Labour has failed to respond to the changing aspirations of the British. In the 1980s the Conservative achievement was to make those born working class feel comfortable about wanting to move up in society. Britain may not yet be as socially fluid as America, but the class system is no longer frozen in ice.


Whoever wins the Labour leadership election must prepare his party for the next general election by recognising that the world has changed. The politics of envy have lost their potency. Labour need not lose, but it has to find new friends all over the country, and across all social classes and income groups, before it can win.

What actually happened, of course, is that Labour chose John Smith. At the time he was considered to be on the right of Labour, though his enthusiasm for higher taxes was partially blamed for losing the 1992 election.

In today's world, that belief in public spending would have him condemned as a left-wing extremist. So too would the trade union support he enjoyed; asked why he hadn't joined the SDP during the Great Schism of the 1980s, he replied: 'I am comfortable with the unions.' And his Scottishness would be regarded with some suspicion. 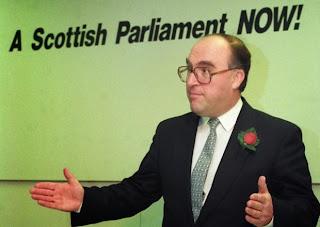 I'm not sure that any of this represented a response to 'the changing aspirations of the British'. Nonetheless, Black Wednesday came along a few months later, and by the time Smith died in 1994, he had a 20 per cent lead in the polls over the Tories.
Posted by Alwyn W Turner at 9:23 am