In 2005, following a third successive election defeat, the Conservative Party staged a beauty contest for those who wished to succeed Michael Howard as leader. Up until that morning, the front-runner had been David Davis, but by the time all five candidates had made their 20-minute speeches, he'd been overtaken by David Cameron.

Amongst those who had their minds changed was me. I rated Davis highly at this stage, largely on the strength of a gig he did with Tony Benn at the Royal Albert Hall in 2002. Benn was then at the peak of his popularity as a lovable elder statesman, and for a Conservative to have the nerve to go head-to-head with him in front of an audience that was guaranteed to be 99 per cent anti-Tory showed, I thought, considerable bottle and self-confidence. He was also very good on the night.

Unfortunately he wasn't very good at that 2005 conference, while Cameron was brilliant. Maybe - I've often had cause to think in the last ten years - I was dazzled by a smoke-and-mirrors act, but my immediate response was to predict to the person with whom I was watching on TV that Cameron would win the leadership and would go on to win the next two general elections.

As I say, maybe I was caught up in the heat of the moment. In the final poll, the party members voted for Cameron over Davis in a ratio of two to one, but come 2010 the country did not. He failed to win the election, despite facing only a badly wounded Gordon Brown, a man whose most noteworthy contribution to the campaign was to insult a supporter for her alleged bigotry.

Now, however, Cameron has actually won an election, and I feel my original judgement was sort of vindicated.

This has been a spectacular victory, though not quite as wondrous as some are claiming. The Conservatives' share of the vote went up, but turnout was still poor and Cameron persuaded just 24.4 per cent of the registered electorate to vote for him. This was, however, better than the 23.5 per cent he achieved last time round (itself an improvement on Labour's 21.6 per cent in 2005).

So I wanted to make a couple of points about Cameron.

The first is something that I explored at greater length in an article on the twenty-first anniversary of Black Wednesday. This is a photograph of Norman Lamont, then chancellor of the exchequer, announcing Britain's humiliating withdrawal from the exchange rate mechanism in September 1992: 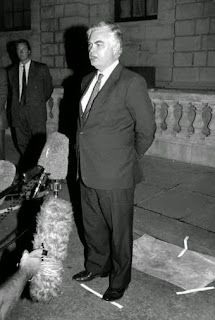 And there, off to one side, is his 25-year-old adviser and speech writer, David Cameron.

Cameron, I wrote, 'witnessed at close quarters the spectacular implosion of a party that once believed it was predestined to power'. I suggested that this is perhaps why he always seems so relaxed in a crisis. Similarly George Osborne, who was at Douglas Hogg's side in the BSE disaster of 1996. These people had experienced such dreadful political depths in their early years that very little was going to faze them.

Ed Miliband and Ed Balls, on the other hand were New Labour advisers in the 1990s, at a time when the party was already coasting into government. They had no such baptism of fire.

When Cameron became leader in 2005, it was clear that his job was, in the cliché of the time, to 'decontaminate the Tory brand'. The early efforts were clumsy and gimmicky: hugging hoodies and huskies, demonstrating his green credentials by installing a windmill on his roof and cycling to work (followed by a car, carrying his papers).

Then he got blown off course by the bankers' recession. No longer, it appeared, was sunshine going to win the day. The concept of the Big Society withered on the vine (though it's actually very good and the Labour Party should take it back).

Instead, the attempt to modernise the party seemed to consist of little more than the sudden, unpromised introduction of same-sex marriages. It didn't seem like very much - essentially a new name for civil partnerships - but actually it turned out to do the job really rather well.

Because the success of same-sex marriages lay not in the legislation itself, but in the way that it provoked a mass exodus from the party. Some constituency organisations claimed to have lost up to half their members as a result of the policy.

This was, most commentators agreed, disastrous for Cameron. But it wasn't. In one fell blow he'd cleared out large numbers of the 'fruitcakes, loonies and closet racists', as he'd described Ukip back in 2006. Many of them, of course, went straight over to Ukip, giving that party a huge boost in membership and popularity.

Less noticed was the effect on the Conservative Party itself, now smaller but - from Cameron's perspective - much better looking. It has become difficult to denounce the Tories as racist, sexist, homophobic and still retain any credibility as a political observer. The party that embraced economic liberalism in the 1980s has accepted the social liberalism that spread across Britain in the 1990s.

The election results this week saw Cameron increase the Conservative share of the vote, largely at the expense of the Liberal Democrats. All those right-wing commentators like Simon Heffer and Charles Moore who had insisted that the Cameron project was misguided, that he shouldn't be trying to appeal to the liberal vote (sometimes even suggesting he form an electoral pact with Ukip) - they turned out to be completely wrong.

There are many other commentators for whom the Tory brand cannot ever be sufficiently decontaminated, but it turns out that he's done enough. Not enough for those in the long-derided 'metropolitan elite' of course, those who follow in the pioneering footsteps of the delegate to the 1982 SDP conference, excitedly proclaiming: 'There may be minorities we have not yet discovered.' But enough for the rest of the country.

The achievement of Tony Blair in the mid-1990s was to make the Labour Party a safe home for ex-Tory voters. If Cameron hasn't quite reciprocated that achievement, he has gone some way towards it. There were many disillusioned Liberal Democrats, and even some lifelong Labour supporters, who simply couldn't countenance Ed Miliband and who felt just about safe enough to turn to vote Conservative for the first time ever, despite grave reservations over Tory policy.

As all the polls showed, Cameron's ratings outstripped his party's; Miliband's trailed his.

The Left need to get used to the idea that Cameron and Osborne have changed the Conservative Party for good. A new line of attack is needed.

One final thought. There is much talk of this election resembling 1992 when John Major won a slender majority and then ran into trouble with his own party over Europe. And look what's coming next, say the columnists: it's a European referendum and history could repeat itself.

I think this unlikely. If Ukip had got, say, five MPs they might have formed a rival pole of attraction for Eurosceptic Tory members, and there might have been defections over the referendum arrangements. Then Cameron would have had trouble. That might still happen if there are a few by-elections that allow Ukip to boost their numbers, but I doubt it. And Douglas Carswell does not in himself constitute a rival pole of attraction.

In any event, Cameron is much more in tune with the mood of his party than Major was. He remembers all too well the damage that Europe did to the Tories in the 1990s. Most importantly, he doesn't face the same problem that afflicted his predecessor.

Because Major's real grief over Europe was not to be found amongst the 'bastards' on his own backbenches; it lay in the House of Lords. There lurked the malign influence of Margaret Thatcher, the deposed but still powerful ex-leader, constitutionally unable to keep herself from interfering, from stirring up trouble, from seeking to undermine her successor as he tried to get the Maastricht Treaty through Parliament.

As I wrote in my book A Classless Society:


Thatcher's behaviour during Major's premiership was even worse than that of Edward Heath during her own time in office. Heath had been unstinting in his disapproval as he remained stubbornly on the backbenches ('like a sulk made flesh,' in the words of journalist Edward Pearce), but he hadn't actively engaged in plotting against her. But then, as a minister told the BBC's John Cole: 'She was always criticising the government when she led it, so why expect her to change now?'

The EU referendum won't all be smooth sailing, but it'll be less choppy than Major's trip back from Maastricht. And easier than Cameron's rite of passage on Black Wednesday.
Posted by Alwyn W Turner at 1:11 am