Good news from Tristram Hunt on the state of the Labour Party. Writing in the Daily Telegraph, the shadow education spokesperson says that Labour has already 'learnt some early lessons' from the 'catastrophic' election results.

And those lessons are: 'We are no longer in favour of a 50p higher tax rate; we support a referendum on our continued membership of the EU; we back the expansion of Heathrow; and we did not - despite the rebellion of some - vote against welfare reform.'

Yes, well, I'm not entirely sure that these are necessarily the lessons that the electorate were hoping would be learnt, but there we are. At least Hunt's proud of them. 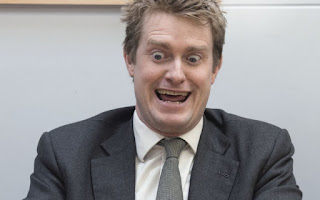 Of these achievements, the new position on the EU referendum is irrelevant - the vote's going to happen, whether Labour 'support' it or not. And the reconsideration of the top tax rate and the welfare reform is supposed to wave a white flag, to send out signal that the Tories have won the arguments about wealth creators and deficit reduction.

The one that I find a bit odd, though, is the Heathrow business. Because that's a huge commitment for a temporary leadership to make. And it's one where the Labour position actually does matter. If for example, the party said that it would never support a third runway at Heathrow and would cancel the project without compensation if they were to be elected, that would cause the government serious problems. I'm not saying they should say that, merely pointing out that this is a long-term undertaking. Why worry about it now?

More broadly, there's something I don't entirely follow with this approach that the interim leadership of Harriet Harman is taking, this attempt 'to show the party has listened to the electorate'.

I know Labour didn't win, but a lot of people voted for the party, and their voice is being ignored. If they'd wanted to vote for MPs who agreed with the Conservative manifesto, presumably they would have voted Tory. Surely they didn't return Labour MPs in the hope that all policies would be abandoned on entering Parliament?

The lessons that can be learnt from the electorate should be about areas of policy, not the policy itself. If, for example, people are worried about the benefits bill (and I think they are), then it's Labour's job to address those concerns. But not simply by adopting Tory proposals. That's silly.

Similarly if they're concerned about immigration (and I think they are), then Labour needs to engage with that issue. Which could mean defending open borders, if that's what they believe in. But the lesson is that the party should talk about it. Hunt mentions in passing that Labour were seen as being 'lax on immigration', but sadly he has no good news to impart on this subject.

One other point that annoyed me in Hunt's piece. (He's always capable of annoying me.) He writes: 'a vote for the SNP did what it has always done: let in a Tory government.'

I know this is a standard Labour line, but I wondered: is it true? So I did what any concerned citizen would do, and looked up the figures on Wikipedia. This graph shows the share of the vote won by the four main parties in Scotland between the election of October 1974 and that of this year. 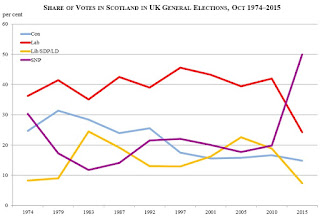 The purple line is the SNP vote. They did well in 1974, coming second in an election that was won nationally by Labour. Then their vote slumped for the three elections won by Margaret Thatcher. The share didn't change between 1992 (narrow Tory victory) and 1997 (Labour landslide), but fell a little for Labour's two successes in 2001 and 2005.

In other words, there's no truth whatsoever in the idea that an SNP vote helps the Tories. It makes no difference at all. Presumably Hunt is speaking here in his capacity as party hack, rather that of historian.
Posted by Alwyn W Turner at 12:18 pm