They're not in love, it's just a silly phase they're going through. Kevin Meagher in the New Statesman points out that Labour Party members have always had a bad reaction to being in government, tending to fall out with each other, before pulling themselves together and trying again.

Meagher is quite right, of course. There is a depressing familiarity about Labour's behaviour during the current leadership election. So as they say on The News Quiz, I brought along some cuttings to make the point. These have been culled at random from a very cursory glance through the papers. 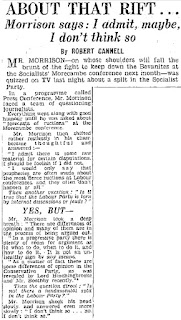 So here's Herbert Morrison in 1952, after the fall of Clement Attlee's government, being asked: 'Is it true that the Labour Party is torn by internal dissensions or feuds?' To which he replies: 'There are differences of opinion and many of them are in the process of being argued out. In a progressive party there is plenty of room for argument.'

Despite those 'differences', Labour did come back from the 1951 election defeat, though it spent thirteen years out of office first.

After Harold Wilson's government lost power in 1970, the period in opposition saw bitter divisions over Britain's membership of the European Community. Roy Jenkins and other pro-Europe Labour MPs defied the party whip and voted for Britain's entry, causing Tony Benn to write in his diary about the emergence of 'a new political party under the surface'. Roy Hattersley later reflected that Jenkins's rebellion 'was the moment when the old Labour coalition began to collapse'.

As the Daily Express pointed out in a leader column: 'The longer the feuding, the poorer grows Labour's credibility. That is not good for the country. Our parliamentary democracy demands a strong, vigorous opposition.'

Happily for Labour, the Conservative government of Edward Heath was so disastrous that the electorate removed it from office after just four years. It was a close-run thing though: the Tories got more votes in the February 1974 general election than did Labour.

And then there was the most divisive episode since the war: the fallout from the 1979 election defeat, with the rise of Bennism, the departure of the SDP and a full eighteen years in opposition.

So Kevin Meagher is perfectly right that, even if the Labour Party were daft enough to elect Jeremy Corbyn as its leader, this is (just about) in keeping with tradition. But it feels different this time. Different at least to 1981, the only occasion of which I have personal memories.

And I think Meagher may be a little optimistic is his conclusion: 'Ultimately Labour will survive - as it always has done before.'

I'm not entirely convinced by this. It's the most likely outcome, admittedly. But I've been saying for the last few years that the current political alignment was unsustainable, predicting that: 'New political forces will emerge, whether within the existing parties or outside them.'

Maybe it's the start of that re-alignment that we're now seeing.
Posted by Alwyn W Turner at 8:33 am