The longest suicide note in history. Gerald Kaufman's description of the Labour Party's 1983 election manifesto is one of the great modern political cliches. And like so many cliches, it's become so familiar that it can sometimes conceal the truth.

So it's worth asking: Was that manifesto really the most ludicrously left-wing platform ever put to the British electorate? What did it actually say?

Obviously, there's the famous stuff about nuclear disarmament, withdrawal from the European Economic Community (as it then was), and abolition of the House of Lords, but what else was in there? 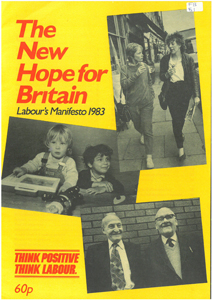 Well, the document starts with what it calls 'an emergency programme of action', centred on these pledges:
It's not perfect, and you or I may not agree with everything, but it's a coherent and reasonable set of priorities. (It helps, of course, that thirty years have passed, and ideas like having an equalities minister no longer sound like the loony left nonsense they were depicted as at the time.)

Also quite reasonable is the call for greater investment in industry, partially funded by North Sea oil, and the threat that if the major banks did not play their part, 'we stand ready to take one or more of them into public ownership'. That was considered extreme at the time; not so much now.

The document goes on to say that:


Our proposals add up to a considerable increase in public spending. Our programme is thus heavily dependent upon the achievement of our basic objectives: namely, a large and sustained increase in the nation's output and income and a matching decline in the numbers out of work. It is this that will make the resources available for higher public spending programmes and cut the enormous cost of unemployment.

Elsewhere it explains that 'It would be wrong to finance the initial boost to spending by increasing taxation', and that therefore: 'Like any other expanding industrial enterprise, we shall borrow to finance our programme of investment.'

(It's probably worth noting that at the time it didn't seem so heinous to say you were in favour of borrowing; Keynesian economics was still a plausible option.)

And it goes on. And on, and on. For there was a major problem with the document in that it didn't confine itself to the big themes. By attempting to shoe-horn everything in, it lost focus. (Perhaps, on sober reflection, a policy on angling wasn't entirely necessary.) Kaufman's use of the word 'long' wasn't entirely inappropriate: it's not the word count, so much as the number of subjects covered.

But I would suggest that perhaps Kaufman's phrase was simply too memorable, and that it has misshaped our perceptions of the time. It lays the blame in the wrong place. Because - and I don't think this is simply in retrospect - it wasn't the manifesto alone that resulted in Labour's worst electoral performance since the war.

Not when there was so much else that was wrong.

Austin Mitchell's excellent book on the 1983 election, Four Years in the Death of the Labour Party, for example, documents some of the appalling incompetence that marred Labour's campaign that year. There was no organisation, no planning, no idea what the hell was going on. The party leadership, lacking strategy, just lurched from one day to the next.

And at the supposed head of this dysfunctional operation was Michael Foot, a good and gracious man who should never have been chosen by Labour MPs to be their leader. It wasn't a role for which he had any qualities.

The press, of course, were merciless. Clive James in the Observer called Foot 'a floppy toy on Benzedrine,' the Sunday Telegraph referred to him as 'an elderly, ranting pamphleteer waving a stick in Hampstead,' the Sun said he was 'an amiable old buffer, his jacket buttoned too tight, his collar askew, his grey hair falling lankly'. The Sun also ran a cruel and devastating headline: 'Do you seriously want this old man to run Britain?' 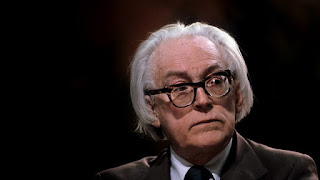 With all the excited froth at the moment about Jeremy Corbyn's chances of winning the Labour leadership election, there are repeated references back to 1983 (when, as it happens, Corbyn first entered Parliament). The Labour Party took such a beating that year that its soul was scarred, and it's been living in fear of being labelled 'left wing' ever since. The longest suicide note in history casts an even longer shadow.

I'm not sure that the party should be so afeared. There were many other reasons why Labour lost in 1983.

There was the split that produced the SDP, there was the Falklands factor, there was the start of economic growth (after monetarism had been quietly buried in an unmarked grave). And, above all, there was a lack of unity in the higher reaches of the party, no sense that any of Foot's senior colleagues were interested in following him or agreeing with each other.

Oh yes, and there were the policies. But they only come in at about number five or six in the list of reasons why it all went so horribly wrong. They need to be kept in proportion.

Probably the one huge strategic mistake in the manifesto was the commitment to leave the EEC without a further referendum. Allow for that  - admittedly major - change, and then imagine that this manifesto had been presented to the British public in 1997 by Tony Blair, when he was at the peak of his persuasive powers and the Tories were on the ropes. I believe Labour would have won handsomely.

This is not to say that it's all about presentation. But it is to say that, when it comes to winning elections, policy isn't anywhere near as important as politicians and commentators believe it to be. Broad positions count, leadership and unity count, detail doesn't.

And concepts of 'left' and 'right' don't matter much either. Most people don't think of themselves in those terms. At various times, Labour voters will switch to Ukip, Conservative voters to Labour, and Lib Dem voters to just about anybody...

There are other lessons Labour needs to learn from the 1980s, and I shall return to the subject. I think it might lead somewhere.
Posted by Alwyn W Turner at 9:25 am