How the face of nations alters

Demolition work has now started on the Sir George Robey pub in Finsbury Park. For the last ten years, the building has been held up by scaffolding and the site has been boarded up, and there was never really any doubt about its future. Even so, it's a bit sad to see.

Situated just opposite what used to be the Rainbow Theatre (now occupied by the Universal Church of the Kingdom of God), the Robey was a music venue of some vintage and grubbiness. I played there a couple of times in the 1990s as part of a duo called the Dust, and while it wasn't the best venue in North London, it had a certain charm.

It was also here that I first met my friend Paul Thomas, with whom I currently make music from time to time under the name Lee Enfield.

Despite the name, I don't think there's any suggestion that George Robey himself ever played here. He might, though, have played the Finsbury Park Empire round the corner. That's gone now as well, demolished in the early 1960s and replaced by a block of flats.

What great revolutions we live to see nowadays. 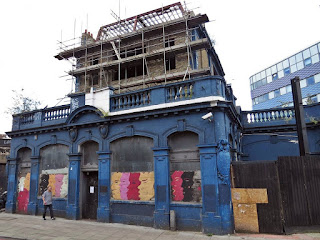