He won't harsh your buzz: a portrait of Tom Watson

PLEASE NOTE: A fuller and much better version of this piece can be found here on the Lion & Unicorn site where I now do most of my posting.

It's hard to ignore Tom Watson, the current front-runner to become deputy leader of the Labour Party. He's no shrinking violet.

Born in 1967 - midway between the two Miliband brothers - he shared with other New Labour MPs an early commitment to a political career, progressing to Westminster in 2001 from the National Union of Students, via a stint as political officer to the Amalgamated Engineering and Electrical Union (AEEU, now part of Unite). Despite the orthodox credentials on his c.v., however, he didn't look as smooth and sleek as most of his contemporaries. And he wasn't averse to employing much more overtly class-conscious rhetoric.

During Blair's first term he had the wit to see - earlier than many others - that a sharp decline in voter turnout needed addressing. Together with Mark Tami, another official at the AEEU who was also elected in 2001, he wrote a Fabian Society pamphlet calling for the introduction of compulsory voting. It was hardly an original proposal, but noteworthy because there was something about the tone that didn't fit with the bland vocabulary of New Labour.

'When the British electorate speaks, we only hear upper and middle class accents,' said Watson. 'Compulsory voting would challenge the elite and give real power to working people.' This, it's worth remembering, was at a time when the Labour Party had 418 MPs.

There was also a note of slightly aggressive sneering as Watson and Tami dismissed the idea that, were the policy to be introduced, there might be protests: 'Some retired colonel from Hampshire would be bound to make a stand against what he saw as the intrusion of the state,' they mocked, 'and no doubt the BBC would film him wearing all his medals whilst he ripped up his polling card.'

Watson was elected to represent West Bromwich East as part of Tony Blair's second landslide victory and began immediately to crop up in news stories, ready to give an opinion on attention-grabbing, if easy, issues.

In 2001, for example, it was reported that Gary Glitter - recently released from jail, following his conviction for possession of child pornography - had recorded a new album. Watson thundered into action, 'It is disgraceful that this convicted paedophile should be allowed to peddle his wares,' he told the media. 'Obviously, young children are the biggest buyers of pop music and they are bound to come into contact with this new recording.' He wanted David Blunkett, the home secretary, to ban the record, and also called for the website of Glitter's official fan club to be closed down.

This, of course, was arrant nonsense. Glitter had served his time, and the idea of preventing him from resuming his life was an insult to justice. Anyway, a man of Watson's age should have known better than to claim that Glitter's thirty-year-old music was now aimed at 'young children'. But it got him in the papers and it established him as a rent-a-quote politician.

He kept himself busy in those early parliamentary years commenting on a wide range of such stories: demanding that Margaret Thatcher's statue shouldn't be placed in the Commons lobby, that foxhunting should be banned, and that Prince Charles should buy British cars. He also set up one of the first blogs by an MP, and was highly praised for it, though if the following quote from his website (reported in the Herald in 2003) is accurate, the acclaim may have been misplaced:


Teens! The BBC politics for kids/teens site is, like, totally whacked! Ditto for the parliament education site, which even has a section for younger yoof. Fanta-stick! So, cut it with the bling bling and do something for the community, man. Join in and take action with any of the groovy sites we've listed, or just drop Tom a line for a quiet rap by the electronic e-mail. He won't harsh your buzz or diss you down the line. 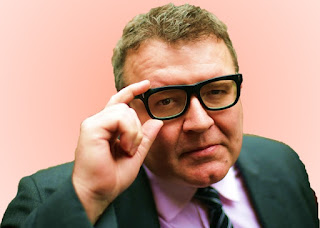 Meanwhile he was keeping his political nose clean as an ultra-loyal MP, on the Brownite side of the party. (Gordon Brown's camp did tend to attract the heavier-set male MP.) He showed no sign of dissent, and most importantly he was dutiful in backing Tony Blair's decision to invade Iraq. 'Voting against the government harms it and harms the party,' he declared. Having done absolutely nothing at all to upset the whips, he was brought into government in 2004 as a junior defence minister.

In September 2006, however, he finally broke from his position of loyal support and abruptly resigned from his government job, writing to Blair to explain why: 'It is with the greatest sadness that I have to say that I no longer believe that your remaining in office is in the interest of either the party or the country.'

It was apparently an attempt to force Blair himself to resign, so that Brown could inherit the office of prime minister. And it worked. Blair responded by announcing that he would step down the following May.

Watson was rewarded by being brought back into government under Brown's premiership, but he resigned again in 2009, in the midst of the expenses scandal, from which he emerged with no great moral credit.

More recently he has made a name for himself by attacking Rupert Murdoch's news empire over phone hacking and by alleging the existence of 'a powerful paedophile network linked to Parliament and Number 10'. Worthy campaigns, no doubt, but happily they're also sufficiently high-profile to ensure that he's still courted by the media (except, obviously, for those outlets owned by Murdoch). 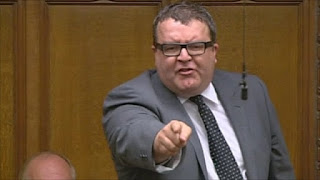 * Added note: When I tweeted a link to this post, Tom Watson tweeted back: 'did you scroll down the page of the "teens" section?' Yes, I did scroll down to the bit where it says that this was 'designed as a parody of how some politicians "connect" to young people.' I'm not sure, however, that he scrolled down my post to the bit where it says that these portraits 'are drawn entirely from their media coverage'. This is about the public perceptions of politicians. Which is why the quote is attributed to the Herald not to his site directly.

This is the first of a series of posts in which - unless I lose all will to live - I shall be looking at each of the candidates in the current Labour Party elections for leader and deputy leader, with portraits drawn entirely from their media coverage.
Posted by Alwyn W Turner at 9:56 am