A football man: a portrait of Andy Burnham

'Have you never felt the lure of sex, drugs and rock 'n' roll?' Mary Whitehouse was asked. To which she replied: 'It depends on what you mean by sex; otherwise not.'

Back in 1993-94 the Observer used to run a feature called Any Questions, in which they told us who their interviewee would be next week and invited readers to send in their queries. And, as far as I can tell, this represented Andy Burnham's first appearances in the national press, with questions to Ian Botham, Graham Gooch and indeed to the ever fascinating Mary Whitehouse.

Sadly the names weren't attached to specific queries, so we'll never know whether Burnham was the one who asked Whitehouse about sex and drugs and rock 'n' roll. Probably not. Given his love of sport, he's more likely to have been the one who asked her: 'Do you regret not having had a professional tennis career?'

Born in 1970, Andy Burnham studied English at Cambridge University and followed what was rapidly becoming the conventional path into Labour Party politics: he worked as a researcher for Tessa Jowell and as parliamentary officer for the NHS confederation, before getting a nice job administering the Football Task Force that had been set up by Tony Banks, minister of sport in Tony Blair's first government. 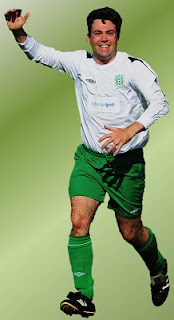 The aims of the Task Force were to combat racism in football, to encourage disabled access, to help 'players to act as role models in terms of behaviour and sportsmanship', and to give fans a voice, particularly in terms of 'ticketing and pricing policies that reflect the need of all on an equitable basis'. As the new Premier League season gets into its stride, you can judge their successes for yourself.

From there, it was but a short step to becoming a political adviser to Chris Smith, the culture secretary, and thence a safe seat in Leigh, though his parachuted arrival was not to the taste of everyone in the local party. 'This is jobs for the boys,' one member complained. 'It stinks to high heaven.'

Duly elected in 2001, he became known as one of the most loyal of new Labour MPs and was swiftly rewarded with promotion into the lower tiers of government. Not that he agreed with the leadership on everything, of course; it's just that he didn't like to advertise the fact. 'I'm not someone who has aired my differences with the party in public,' he says. 'I'm a football man. I do that in the changing room. On the pitch I tend to play the team game.'

In 2006, as Blair began the process of winding up his leadership of the party, Burnham's was one of the names he cited as the future of Labour, alongside those of Douglas Alexander, Ed Balls, David Miliband, Ed Miliband, James Purnell and Pat McFadden. Of those seven, four have now departed from the House of Commons, while another has already had his chance at leadership and blown it: the future isn't working out as planned.

By that stage, Burnham was making his way through the ranks, spending a while as a health minister, where he described his first week as one of mixed blessings: 'It's probably my worst nightmare to find out that my first parliamentary appearance would be winding up on a debate on deficits in the NHS,' he observed, though on a positive note: 'my week had begun on a high with Everton winning.' (He's rather partial to football, in case it had escaped anyone's attention.)

Following time spent in other jobs - Europe minister, chief secretary to the Treasury and culture secretary - he returned to the health department as secretary of state in 2009, and subsequently made the portfolio his own, serving as shadow health spokesperson during Ed Miliband's leadership.

In 2007 he called for the launch of an NHS constitution to spell out the institution's core values and 'to settle a new consensus around the NHS as the right model for Britain's healthcare needs for at least the medium term, if not for the longer term'.

He has also been campaigning for many years for the integration of health and care provision, proposing the creation of a National Health and Care Service. For a politician who claims to like 'doing things that are bold, important, setting a big agenda,' this has been his big idea. It hasn't, though, really sparked into life, and no one discusses its implications: what it means, how it would work. It's quite possibly a very policy indeed, but it sounds dull the way he tells it, and it hasn't caught the public imagination.

His bland, if not blind, loyalty in government led him into some more controversial areas. He was a keen advocate for the issuing of compulsory identity cards, he defended the PFI schemes for the building of new hospitals, and he suggested that the government might need to act to prevent alcohol being sold too cheaply. He was also called upon to implement the decision to scrap the plans for a so-called super-casino in Manchester, Gordon Brown's one distinctive repudiation of the Blair years.

And then there was the Stafford Hospital scandal. He set up the official enquiry into problems at Stafford immediately he became health secretary, but some still felt that there were outstanding questions, and that, in the words of The Spectator, 'he'll never be able to win a Labour leadership contest until he has a proper answer to those questions'.

Elsewhere, he has been dismissive of 'the educated, articulate, letter-writing people' who 'have no idea of what it is like to bring up a kid on a very low income and the pressure that creates and the difficulties that occur'. And he has been keen to stress the value of competitive sport: 'Competitiveness teaches good life values, winning and losing and taking in your stride, teamwork, discipline and a sense of obligation.'

In his time as secretary of state for culture, media and sport, he trumpeted his love of The Royle Family, professed himself - like Stella Creasy - to be a fan of the Wedding Present (particularly, and predictably, their 1987 album George Best), and claimed that 'Jeff Stelling epitomises standards in broadcasting'. He also mounted a robust defence of printed newspapers, arguing that that their 'heritage means something and can help people navigate a world where there is an ocean of shite on the internet'.

The great mystery about Burnham is why he's been talked up for so long and promoted so young. He gives the impression of being competent and personable, but largely uninspiring; an able lieutenant, perhaps, but no commander. He is the only leadership candidate this time who also went for the job in 2010. On that occasion, he finished fourth in a field of five, which was a little unkind - he was probably the third best option.

Above all, though, as he never ceases to remind us, he's a football fan. 'The Burnham family are a close-knit mob and there are three organisations that matter to us,' he once remarked: 'Everton Football Club, the Labour Party and the Catholic church - in that order.' 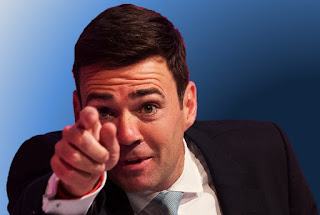 This is the first in a series of profiles of the four candidates in the Labour Party leadership election. Like the pieces I posted about the candidates for deputy leader, these are drawn entirely from the media, so they could be riddled with errors. Tomorrow: Liz Kendall
Posted by Alwyn W Turner at 8:52 am