We won't be the young ones very long

In June 2003 The Times reported that Tony Blair was planning a government reshuffle, but was struggling to find MPs to bring in, because so many had 'blotted their copybooks by rebelling over Iraq and foundation hospitals'. This ruled out a number who had previously served in a junior capacity and might otherwise to be expected to make a return:


The shortage of comeback candidates leaves the field virtually clear for the 2001 intake of MPs. James Purnell, Mr Blair's media adviser in the first term, is already being addressed as 'minister' by backbench colleagues. Andy Burnham, a former special adviser to Chris Smith, is also expected to get the call-up. Tom Watson, a union official before he came to Parliament, and Chris Bryant, the indefatigable euro campaigner, are tipped for government.

Meanwhile Andy McSmith was writing in the Independent on Sunday that the problem with the 2001 intake was that more than half had 'defied the whips on important issues', while others had 'committed the lesser offence of going against the prime minister's wishes'. Only five of the forty new MPs had 'what the whips would regard as clean voting records'. The five he identified were David Cairns, Tony Cunningham, James Purnell, Sion Simon and Tom Watson.

In the event, Blair rather botched the reshuffle, and none of the 2001 intake were brought into government, but happily it was only a hiccup: the good boys were duly promoted a few months later.

Two of those government appointees, Burnham and Watson, are currently back in the news, the bookies' favourites to inherit the party as leader and deputy leader. So they've done well for themselves. 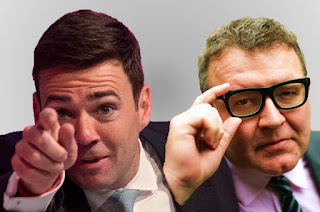 A bit too well, really. In a solid, competent, unexceptional government they'd be ministers of state. Not actually in the cabinet, but relatively serious figures. Nowhere near the leadership, of course. Yet there they are. Having been promoted too early, they're now in with a good chance of being over-promoted. And maybe those two things are related.

The rapid advance of a young generation of political advisers and officials into Parliament during the New Labour era was followed by an equally rapid clamber into government. Despite the vast size of the parliamentary party, there simply wasn't enough competition for places. Which is why the current slate of candidates is so poor.

Still, I've got to vote for someone, so in future posts I shall start going through the candidates to see if anyone can surprise and inspire me.
Posted by Alwyn W Turner at 11:21 am