A throw of the dice

Throughout this Labour leadership contest, I've been predicting a victory for Yvette Cooper. Indeed I was predicting it in April before the general election. I don't like to change my predictions, so I won't. Despite everything, Yvette Cooper will become the leader of the Labour Party.

I am aware, however, that this is - to put it mildly - a minority position. And that I have no evidence for it whatsoever.

In fact, if I'd been paying attention to myself, I would have concluded that Jeremy Corbyn, currently the red-hot favourite, was the likely winner. 'New political forces will emerge, whether within the existing parties or outside of them,' I wrote in 2012; 'things are about to change quite radically.' I added last year that UKIP weren't that change. But maybe Corbyn is the catalyst for this change.

So let's assume that that I'm as wrong now as I was when I placed money on Peter Hain succeeding Tony Blair, the issue is whether Corbyn will be any good as leader.

There are three basic tasks for the opposition. First, that they oppose government policies by producing alternatives. Second, that those alternatives change the terms of the debate. Third, that by changing the debate, there comes at least a reasonable chance of winning the next election.

The first is where things have really gone wrong for the Labour establishment. Losing the election was disastrous, but Harriet Harman's call for MPs to abstain on welfare reform added insult to injury. It smacked of democratic centralism, implying that since the Tories had won the election, then their policies had to be accepted. The decision to abstain made no difference whatsoever to the outcome of the vote, but Harman has been around long enough that she should have got the grasp of symbolic gestures by now. And yet she blew it, and no other single event has done as much to strengthen Corbyn's cause.

Frankly, Corbyn couldn't make a worse fist of opposition than Harman already has.

His MPs, however, could make it much, much worse. If a significant number of them effectively refuse to accept the party's vote, then he will fail from the outset. And they may well do so. They could quote Tony Benn at a meeting of the shadow cabinet in 1970: 'When the boat is sunk, you can't exactly rock it.'

Assuming, though, that he could assert his authority of the parliamentary party, could Corbyn re-frame the national debate? Yes. Is it likely? No. He would have the entire media against him; not just the usual suspects, but the whole of what some like to call the legacy media.

And maybe in there is the hope: that social media and the revival of public meetings can bypass the newspapers and the broadcasters. Maybe Facebook and The Trews will eclipse the Daily Mail and the Ten O'Clock News as the source of political information. I'm not convinced. Not in the short-term. So it would require an active mass membership - in real life, not on the internet - to counteract media hostility. Again I'm not convinced. Nor do I see any sign of Corbyn supporters seeking to persuade, rather than to assert.

Could he offer the possibility of an election win? Well, very probably not. But honestly, you never really know. Labour winning in 2020 is such an uphill task anyway. Someone on Twitter (I apologise for forgetting who - let me know it was you) suggested that, if this were a dice game, Labour needed to throw a six to win, and that Andy Burnham, Yvette Cooper and Liz Kendall could only manage threes and fours. Corbyn, on the other hand, offered the chance of either a one or a six.

Maybe. It is possible that Corbyn (Corbyn, of all people!) could build a People's Army that would massively outnumber Nigel Farage's following, a crusade that stretches far beyond Parliament. How this works within the existing Labour Party structure, however, I have no idea.

I have a fear that a Corbyn-led Labour might echo the miners' strike of 1984-85. There sprang up then a national network of support groups that was really quite extraordinary. It was, said the Financial Times, 'the biggest and most continuous civilian mobilisation since the Second World War'.

If you were involved, even in a peripheral way, with this movement, it was almost impossible to credit the opinion polls which showed the majority of the public firmly on the side of the government and against the NUM. But that was the reality. Most people didn't support the miners, and the result was one of the left's most celebrated of heroic defeats. 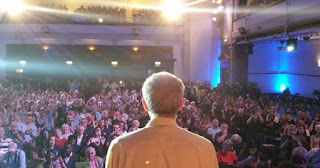 Back before Corbyn declared himself a candidate, I wrote: 'The task of choosing a new leader is to find someone who can articulate a sense of hope for the future, to persuade somewhere around a quarter of the electorate that he or she can help us build a better society.'

At the moment, there's only one candidate who's being seen in those terms. But I suspect there's only one six on his die (if that) and that the other faces are all ones. And I fear that Labour might actually need a double-six anyway.

I have yet to decide who to vote for. Over the course of the next week, I shall look back over the careers of the four candidates as a way of clarifying that question for myself. And I shall start tomorrow with Andy Burnham.
Posted by Alwyn W Turner at 10:24 am