One of the things I write is a game called Who's in the Bag?, which is a simple - but effective - little thing. There's a bag full of cards, on each of which there are three names and, without actually speaking the names themselves, you have to get your team-mates to guess who they are. There's a timer as well. It sells well and has done for a couple of decades now.

Every few years, though, it has to be updated to allow for changing tastes and fashions. Some people - say, Winston Churchill, Jane Austen, Stevie Wonder - are likely to stay in every edition. But others pass their sell-by date and have to be dropped. Robert Kilroy-Silk, for instance: he was thrown out of the Bag some time ago. Liam Gallagher more recently. For other reasons, Max Clifford and Rolf Harris won't be in the Bag this time. And meanwhile some new people will have emerged since the last version, who need to be added.

I'm now working on a new edition of both the main game and the add-on pack of cards. Which means I have to come up with over 1,200 names that I can reasonably expect to be recognised, or that are possible to guess even if they're not recognisable. Donald Trump, for example, is an easy name to convey, even if you've never heard of him. (Lucky you.) Similarly, Mary Beard, Nicola Sturgeon and Paddy Power.

The other factor is that this will probably still be in print in 2020. So there's an element of prediction here. Will Ed Sheeran still be a thing in five years time, or will he have faded in the same way as - oh, I don't know - Jake Bugg seems to have done? What about Harry Kane? Jennifer Lawrence? Will Katie Hopkins become big enough to warrant being put in the Bag?

It's a bit like a low-budget version of Madame Tussaud's selection process. I mentioned in my book A Classless Society that we knew Iain Duncan Smith was doomed as Tory leader when Tussaud's said he wouldn't get an effigy. 'He is not in the papers very much and you never hear his name,' said a spokesperson. 'We are not sure if our visitors will recognise him.' It was a damning verdict.

And the question that's currently troubling me is the parallel case of the Labour leadership. Whoever wins gets put in the Bag, of course. But the losers? If Andy Burnham doesn't get to be leader, is he going to become a household name? How about Jeremy Corbyn? Flavour of the month now, but if he fails to win this election, how big will his public profile be in a couple of years? Politicians generally aren't instantly familiar, as Pointless discovered a couple of years ago.

Much safer is the process of discarding people. Amongst those who I've thrown out of the Bag this time are Ed Balls, Boutros Boutros-Ghali, Rebekah Brooks, Nick Clegg, Abu Hamza, Harriet Harman, Martin McGuinness, Peter Mandelson and Ian Paisley. These are, in my estimation, yesterday's men and women. There's a dangerous sense of power that comes with writing this game...

Any suggestions for people who have become famous in the last three years would be most appreciated. 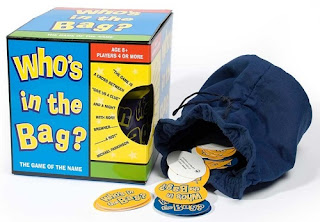