The word that keeps coming up in the profiles I'm writing of the Labour candidates is 'loyal'. Of the nine candidates for the leadership and deputy leadership, eight have repeatedly been described as loyal. And in this context, loyalty means voting as the whips tell you. By contrast, the ninth candidate is Jeremy Corbyn, best known for ignoring the party whip on hundreds of occasions, and therefore being disloyal.

But this is a very limited version of loyalty. Traditionally, it was loyalty to the party that was cherished, rather than simply walking into the right lobby at Westminster. And, traditionally, it's been the political right that has been far less loyal than has the left or the trade unions.

The clearest example was the creation of the SDP in 1981, led by Roy Jenkins (who'd previously led the great parliamentary rebellion to ensure British entry into the European Community). When the right had control of the party, the left went along with it, even if they did grumble and moan. As soon as the left seemed to be in the ascendancy, the intellectual right split from Labour altogether.

The arrival of the New Labour right added a new dimension. Tony Blair, Gordon Brown and Peter Mandelson simply plotted endlessly. Blair tried to get John Smith to stage a leadership coup against Neil Kinnock. Then, when Smith did become leader, Blair and Mandelson schemed against him as well. And eventually, they all descended into plotting against each other. Despite the supposed iron discipline of New Labour, there was no loyalty at all to individuals, leaders or the party.

Jeremy Corbyn, on the other hand, has been an MP for thirty-two years, for perhaps thirty of which he has been in a beleaguered minority. He may not have always done what he was told, but he never threatened to leave if he didn't get his own way, and he has never (as far as I'm aware) plotted to stage a coup against the leadership.

This is relevant, of course, in terms of the current leadership election. Should anyone but Corbyn win, there will be demands for unity, discipline and loyalty. Should Corbyn win, don't expect the right to display any loyalty whatsoever. 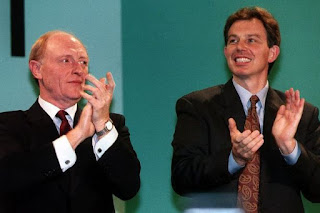