In a January 1974 episode of the sitcom Till Death Us Do Part, Alf Garnett's daughter Rita (played by Una Stubbs) ranted about the TV appearances of prime minister of the time, Edward Heath, before launching into other public figures:


Heath makes me sick every time I see him on there with his great porky face wobbling with fat. And that other one, that other fatty - Cyril Smith MP. Have you seen him? You think they'd make themselves look decent before they go on telly, wouldn't you? You'd think they'd go to one of those health farms or something, wouldn't you?

Did you see it with Jimmy Savile the other day? Did you see them? And they were eating lamb chops, with grease running down their faces.

Given the allegations of the last couple of years, it's an odd coincidence, isn't it, that writer Johnny Speight should have chosen Sir Edward Heath, Sir Cyril Smith and Sir Jimmy Savile to be the targets of her rage? 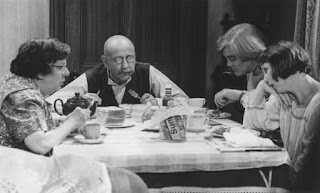