One of the disappointed: a portrait of Angela Eagle

PLEASE NOTE: A fuller and much better version of this can be found here on the Lion & Unicorn site, where I now post.

I've long thought that one of the most clear-cut illustrations of Britain's lack of democracy was the case of Lynda Chalker. She was the minister for overseas development in John Major's government until she lost her seat as MP for Wallasey in the 1992 general election. At which point, she was promptly given a peerage, so that she could continue in the same job, where she remained until the government fell in 1997.

Just to be clear: Chalker was a perfectly competent minister. But really, what's the point in democracy if you can't actually vote someone out of office?

But this isn't about Chalker. The important figure here is the Labour Party candidate who took Wallasey in that 1992 election. 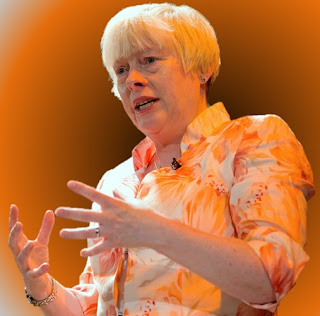 Born in 1961, Angela Eagle studied PPE at Oxford, after which she worked first for the CBI and then COHSE (a health service union, now part of Unison). Whilst in the latter post, she co-authored a Fabian Society pamphlet which called for all-women shortlists when selecting candidates for safe Labour seats.

Her own selection for Wallasey was not dependent on such an arrangement, though it did attract some controversy. The existing Labour candidate was Lol Duffy, a shop steward in Birkenhead who'd come within 300 votes of winning in 1987. But he was deemed to be a supporter of the Trotskyist group Socialist Organiser, so the National Executive Committee intervened and deselected him for the 1992 election.

Seizing the opportunity, Eagle navigated the ensuing selection process with ease, beating into second place Mike Groves, a former member of Liverpool folk group the Spinners. (If you don't remember them, you're too young to have watched light entertainment television in the 1970s.) On a swing that matched the national average, she then took the seat from Chalker and entered Parliament at the age of thirty-one as, in the words of the Guardian, 'a potential bright youngish Labour thing'.

In the ensuing Labour leadership election she nominated Bryan Gould, against the winning candidate John Smith, though she was critical of the expense and length of the contest. 'If we carry on like this,' she argued, 'we will become the party of the perpetual ballot, frantically spending our time and money organising elections for everything under the sun. We will have no money left to campaign except in our own internal elections. And the Tories, who have no internal democracy, will laugh all the way to Downing Street.'

Eagle served her parliamentary apprenticeship during the slow-motion suicide of John Major's government. She attracted some attention for her fierce attacks on the likes of Cedric Brown, the 'fat cat' head of British Gas, and Neil Hamilton, the Tory MP who came to epitomize sleaze, but still found time to vote in support of a deeply controversial pay rise for MPs in 1996.

Early on she attracted the attention of Tony Blair and, following the Labour landslide of 1997, she became a junior minister, at thirty-six the youngest member of his government. By the time the party left office thirteen years later, she had risen to become pensions minister under Gordon Brown.

In public perception, however, her political career counted for very little. Much more interesting were her inclusion in the Commons cricket team (a former member of the Lancashire Schoolgirls XI, she was said to be a useful bowler), and the fact that her twin sister, Maria, was also elected to Parliament in 1997.

Even better was the interview she gave later that year to the Independent, in which she announced that she was in 'a long-term and very happy relationship' with a woman. As reported in the Daily Express, and elsewhere, this made her 'the first woman politician to publicly admit she is gay'.

She wasn't - that would have been Maureen Colquhoun, the Labour MP for Northampton North, back in the 1970s - but even so, it was a big deal at a time when there were vanishingly few lesbians in public life. But this was the late 1990s and the tide was turning. 'Attitudes have changed,' Eagle said. 'I think people are a lot more sensible than we sometimes give them credit for.'

Coming out was a ground-breaking move that saw her receive a message of support from, inter alia, Chrissie Hynde, a note she later cited as her most treasured possession (she's a big Pretenders fan). It also saw her ranked #7 in the Independent on Sunday's list of Women of the Year, two places behind Ann Widdecombe, and only one place behind Dolly the Sheep.

Little since then has excited the same level of media interest. Which is unfortunate, because Eagle was no New Labour robot. She was critical of the mishandling of Ken Livingstone's bid to be the London mayoral candidate in 1999, she heckled Blair when he was explaining to the Commons why we needed to invade Iraq, and in 2003 she co-founded the New Wave Labour group, arguing that the party was on the wrong political track. 'The third way has failed to present any genuine alternative,' she said, pointing out that markets make 'good servants, but poor masters.'

This was no way to make progress in her career, and may explain why she never built on her early promotion to the extent that might have been expected. Or possibly it was because she had already been sacked from the government in a reshuffle in 2002, and it took her some time to clamber back. 'I take Angela with a pinch of salt,' noted Chris Mullin in his diary the following year, 'since she is one of the Disappointed.'

The facts of that dismissal remain a little murky. At the time, the Guardian's Simon Hoggart reported that 'she was sacked because [David] Blunkett finally agreed with his civil servants and decided that she was not up to the job'. A decade later, though, Damian McBride claimed that: 'Tony forgot Home Office minister Angela Eagle existed, gave someone else her job and effectively sacked her from the government by mistake.' 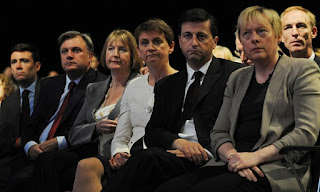 In any event, she's back now. She's been shadow leader of the house for the last four years and is standing for election as deputy leader of the Labour Party. Even if she doesn't win, her centre-left politics should ensure that she becomes a key figure in the coming years. Depending, of course, on where the party chooses to go.

And on that note: 'The Labour Party has changed,' she declared in 2007. 'Our members are pragmatic and they want us to be in government.' We'll soon see how true that remains.

This is the third in a series of posts in which - God willing - I shall be looking at each of the candidates in the current Labour Party elections for leader and deputy leader, with portraits drawn entirely from their media coverage.
Posted by Alwyn W Turner at 8:39 am