In memory of Teresa Gorman, who died yesterday, I thought I would post an extract from my book A Classless Society about the Maastricht rebellion, in which she was such a prominent feature. Apart from anything else, it's good to remember that both major parties have had long-standing dissidents, who party managers feel probably shouldn't be allowed out in public too much.


The attempt to get Maastricht ratified in the Commons dominated politics in the first half of 1993. In a series of votes a stubborn group of Conservative backbenchers fought every line of the Bill, often siding with the Labour Party in what John Major called ‘a mad-hatter coalition’. The ensuing bitterness soured the party for years to come. ‘In the voting lobbies it was not unknown for one Conservative MP to spit at another,’ remembered Michael Spicer. ‘Physical violence occurred during the course of one or two crucial votes.’ He also recalled a senior MP being dragged by his hair into the government’s lobby.

Spicer was a key figure in the rebellion, but one who insisted on maintaining good relations with the whips and the leadership. He was also reluctant to attract attention to himself at a time when the open voicing of dissent guaranteed publicity. Indeed, Maastricht made media stars of several backbenchers who would otherwise have languished in obscurity.

Chief amongst them was Bill Cash, whose slight frame, unflattering pinstripe suits, greying hair and glasses made him look like Major’s Eurosceptic doppelganger. He was ‘the biggest bore in the House of Commons’, according to his colleague Julian Critchley, though another Tory MP, Teddy Taylor, disagreed: ‘I am the biggest Euro-bore there ever was.’ Cash managed to vote against his government forty-seven times during the Maastricht debates, with a further thirteen abstentions, and did what he was told just twice. 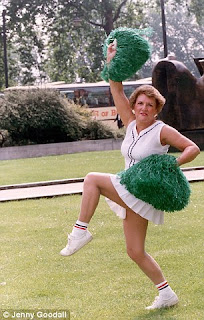 He was rivalled in coverage only by Teresa Gorman, the MP for Billericay whose vocal enthusiasm for hormone replacement therapy, never knowingly understated dress sense and tattooed eyebrows (to conceal the fact that her real ones hadn’t grown back after being shaved) were matched only by her splendid quotability. ‘The Conservative establishment,’ she once announced, ‘has always treated women as nannies, grannies and fannies.’

There was an equally oddball supporting cast, with notable contributions from the married couple Ann and Nicholas Winterton, dismissed scornfully by Michael Heseltine as having a knack for stumbling upon ‘a populist cause waiting for a voice’. Their fellow MP Nicholas Soames was less restrained: ‘You’re cunts,’ he told them after one Commons rebellion, ‘and ugly ones to boot.’

This group of mavericks and misfits – a hard core of around twenty-five, with a similar number on the fringes – were undoubtedly motivated by high principle, albeit in some cases only recently discovered. This, however, was neither the first nor the lasting impression they made on a television audience. Every time they conducted yet another round of interviews on College Green, they came across as slightly strange, obsessed with an issue that simply didn’t feel like a priority to most of the electorate. They were not, for many viewers, very endearing...
Posted by Alwyn W Turner at 6:01 pm