It was fifty years ago today...

...that the Labour government of Harold Wilson announced the awarding of MBEs to each of the four Beatles. To mark the occasion, here's an extract from my book My Generation: 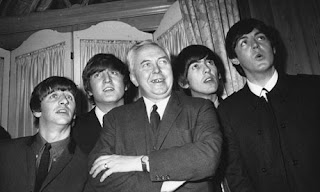 The awards prompted a wave of outrage and of honours being returned in protest by previous recipients; a former RAF squadron leader who sent back his MBE summed up the mood: ‘I feel that when people like the Beatles are given the MBE the whole thing becomes debased and cheapened.’

Cabinet minister Barbara Castle recorded that Labour MPs were unimpressed (‘The reaction was wholly unfavourable, the word “gimmick” being prominent’), and the artistic establishment was no less displeased, with Noel Coward noting: ‘Some other decoration should have been selected to reward them for their talentless but considerable contribution to the exchequer.’ Meanwhile the Downing Street mailbag revealed that disapproving letters outnumbered those in support by a ratio of two to one, though since a good many were from fans of other bands that had somehow been overlooked, that fact wasn’t perhaps overly significant.

Given that the same honours list awarded OBEs to singer Frankie Vaughan and to television actor Jack Warner of Dixon of Dock Green fame, it wasn’t entirely clear what the fuss was about. Certainly the Beatles were younger than most recipients, but then their foreign earnings – which had been what prompted the award – were considerably greater.

A more serious concern was that put by another cabinet minister, Anthony Wedgwood Benn: ‘The plain truth is that the Beatles have done more for the royal family by accepting MBEs than the royal family have done for the Beatles by giving them,’ he wrote in his diary. ‘Nobody goes to see the Beatles because they’ve got MBEs but the royal family love the idea that the honours list is popular because it all helps to buttress them, and indirectly their influence is used to strengthen all the forces of conservatism in society.’

He needn’t have worried: the award did little to make the establishment fashionable. If anything the danger was in the other direction, a fear expressed by Elkan Allan, co-creator of Ready Steady Go!: ‘When the Beatles got the MBE, pop music just became too respectable.’ The playwright Joe Orton, commissioned to write a screenplay for a Beatles film that sadly never happened, made the same point, albeit obliquely, to Paul McCartney: ‘The theatre started going downhill when Queen Victoria knighted Henry Irving. Too fucking respectable.’

But even those fears didn’t really materialize. The Beatles managed to carry off the MBEs episode without seeming to have made any concessions to the establishment, and subsequently claimed that they’d smoked a joint in the lavatories while waiting.

Wilson himself was to comment in later years that: ‘They were regarded as clean-living lads during the time they were getting established, whatever may have gone on later.’ Which suggested that perhaps he wasn’t quite as in touch as he liked to appear...
Posted by Alwyn W Turner at 12:05 pm