How to leave a calling card

Next month it will be fifty years since the Conservative Party chose a new leader. Alec Douglas-Home had resigned - just ten months after losing the 1964 general election to Harold Wilson - and for the first time the party was staging a leadership election. Previously leaders had 'emerged' after informal soundings had been taken.

The front-runners this time were Reginald Maudling and Edward Heath. Maudling was a major figure, having been chancellor of the exchequer until the election defeat, while Heath was then little known to the public: his biggest jobs had mostly been behind the scenes, first as chief whip and then as Britain's chief negotiator in the country's unsuccessful attempt to join the European Community.

In the country, there would have been no doubt about the victor, but at this stage the electorate consisted solely of Tory MPs - and former chief whips tend to have a bit more sway in such circles.

So they went into the final day of campaigning with the result very much in doubt. 'Tory Big 2 Neck and Neck for Ballot No 1,' read the headline in the Daily Mirror, and the Daily Express agreed: 'It looks like a very close finish - perhaps deadlock.'

The rogue element was the third entry in the field, the former health minister Enoch Powell. No one expected him to get more than a couple of dozen votes, but that might have been enough to muddy the waters. If a candidate was to win on the first ballot, the rules required him (no one was thinking it might be 'her') to get over 50 per cent of the vote and to have a clear 15 per cent lead over the second-placed candidate. Powell's involvement might make that difficult, and mean that a second ballot could prove necessary.

It turned out that it wasn't. Heath got 150 votes (50.4 per cent) to Maudling's 133 (44.6 per cent), a result that didn't fulfill the second criterion, but was sufficient to persuade Maudling to withdraw from the contest, leaving Heath as the first grammar school-educated leader of the Conservative Party. 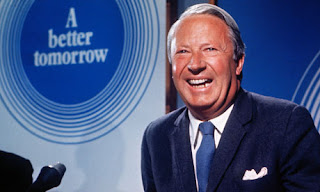 And what of Powell? Well, he didn't even meet the low expectations of his supporters. Just fifteen MPs cast their votes for him, although it's worth noting that a couple of them went on to better things: Nicholas Ridley and John Biffen were later to serve in Margaret Thatcher's cabinet. Powell had, he said, 'left his calling card', put down a marker that he'd be back. It didn't seem very likely, though: he was obscure before, and his profile hadn't been raised particularly during the campaigning.

Less than three years later, however, Powell had eclipsed both Heath and Maudling and had become the best known - if most controversial - politician in the country. The 1968 'rivers of blood' speech took him to undreamt-of heights. Just before that speech an opinion poll suggested that just 1 per cent of the public thought he should become leader in the event that Heath stood down. Run again after the speech, a similar poll showed him as the front runner.

And the lesson from this? Maybe that whoever loses the Labour Party leadership election this year shouldn't lose all hope. Or maybe not.
Posted by Alwyn W Turner at 1:26 am