The traditional way of presenting a radio show in the early hours of the morning is to adopt a slightly laid-back tone, assuming that many of those listening want to be lulled to sleep. That's not the approach favoured by The Two Mikes, broadcast on TalkSport from 1 am on weekdays.

Presented by ex-tabloid journalists Mike Graham and Mike Parry, the show features the two men talking at high volume, mostly simultaneously as they try (in vain) to bludgeon the other into silence and submission. They fight, they bicker, they hurl insults, they pick up on every little slip and error, they interrupt, they try to distract the other's train of thought, and they're the best comedy double-act I know of on British radio.

The main attraction, of course, is Mike 'Porky' Parry, who is an extraordinary broadcaster. His most obvious characteristic is the way his mouth always operates at least a sentence-and-a-half before his brain. This produces a relentless stream of Spoonerisms, mixed metaphors, contractions ('the Beefa, er, the FIFA Board') and malapropisms: 'We all know Billy Bremner was an avaricious drinker.'

It also means that he'll start down a path without the faintest idea of where he's headed. So he'll try to make a passing comment about poachers turned gamekeepers and then tie himself in knots trying to work out where he stands in this equation, before catching up with himself and declaring in triumph: 'I'm a poacher - by profession, by nature and by instinct.' By which stage, of course, he's forgotten the point he originally intended to make.

He also has the ability to run in several different directions simultaneously. So in the first hour last night (all the comments in this post relate to that one hour), the agenda was clearly that they would cover three subjects: Jack Warner threatening to spill the beans on FIFA, Jack Wilshere's behaviour at Arsenal's victory parade, and the appointment of Rafa Benitez as the manager of Real Madrid.

What we actually got was Parry rambling about everything under the sun, from how he was once reduced to poverty after a tax demand, right through to his account of how Chester (his home town) used to be the world's biggest port until 'a guy from China' threw some seaweed in the River Dee.

He also told us that he regretted the time when he described Spain as being full of peasants with bread under their arm, walking alongside donkeys wearing straw hats. And he insisted that he could speak with some expertise on the subject of badgers because: 'I've got a mate who once went to Cirencester Agricultural College.'

And all the way through, Mike Graham - the straight man of the outfit - is taunting and teasing and mocking Parry's doomed battle with the English language, his imprecision with facts, and his inability to follow a train of thought. 'You're talking absolute cobblers,' Graham concluded at the end of the first hour. And he was right.

Interrupting this endless squabble, they managed to take one phone call from a listener, who also talked non-stop, adding his voice to the two already fighting to be heard. And they spent a few minutes on the line to a Russian journalist, who was trying to make some points about FIFA, though it was hard to tell quite what he was saying, since his contribution simply gave Parry the chance to share his thoughts on what a beautiful country Russia was: 'I love the architecture of Moscow and Leningrad and St Petersburg...'

If Parry is the star, then Graham deserves a great deal of credit as well. Parry's had other partners before. Many have fond memories of his double-act with Andy Townsend, an ex-footballer whose nagging suspicion of his own intellectual shortcomings meant that he never quite knew when to challenge Parry's flights of contorted rhetoric. But Graham - a good, opinionated broadcaster in his own right - is the perfect foil.

And despite all the squabbling, there's a genuine affection in there. On occasion, normally later on in the night, they can get into dewy-eyed reminiscences of the old days of journalism, proving yet again that there's nothing quite as sentimental as an aging tabloid hack.

Although all the above quotes come from the first hour of last night's show, I can't resist including the all-time greatest Parryism, as revived regularly by Paul Hawksbee and Andy Jacobs, in which the great man described Bordeaux: 'You know, where the tapestry comes from.'

I'm not saying that Mike Parry is a genius. But he might just be a work of genius. 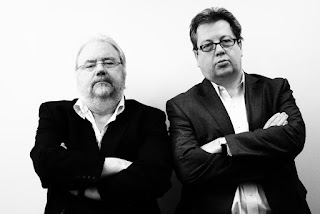