In the article published in the Sunday Times yesterday and signed by both George Osborne and Iain Duncan Smith, they begin by quoting David Blunkett's views on the benefits system: 'bonkers'.

I've always had a lot of time for Blunkett. I seldom agree with him, but he's generally worth listening to (except when he's claiming that Ed Miliband was the new Clement Attlee). His instincts are those of the old working class, which made him an unusual figure in the New Labour Party. He was clearly aware of that position, that he was out of step with the modern leadership, which is why - for all his reputation as a plain-speaker - he buttoned his lip on some subjects altogether: when, for example, was the last time you heard him mention homosexuality?

More broadly, however, he has consistently voiced perceptions that challenge any sense of left-wing complacency. And, as the excitement over the Labour leadership election mounts, I'm reminded of a line from 2000, published in his book The Blunkett Tapes:


'The liberal left believe that if they think hard enough that the world is with them, then somehow it is, whereas the very opposite is true. Britain is an innately conservative country and we need to win people over to progressive politics.' 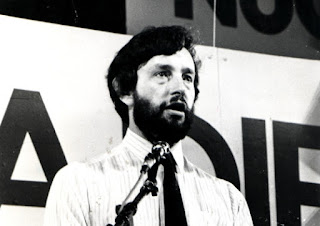 * The 'Satan's bearded folk singer' quote comes, of course, from the late Linda Smith.
Posted by Alwyn W Turner at 11:02 am