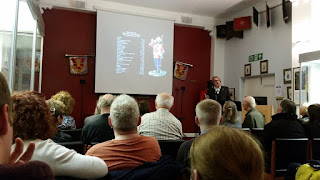 And finally, on the occasion of Armistice Day, a further plug for my piece about the National Union of Ex-Servicemen, the most radical of the campaigning groups in the aftermath of the First World War. This was the organisation that effectively made Douglas Haig found the British Legion, so worried was he by their revolutionary potential.
Posted by Alwyn W Turner at 1:25 pm