One of the things that intrigued me when writing The Last Post was the role of the National Union of Ex-Servicemen. The NUX, as it was known, was by far the most radical, even revolutionary, of the veterans' groups that sprang up in the years immediately following the First World War. 'Instead of being the means to save capitalism,' declared the Union's general secretary, 'the organised ex-servicemen will now be the means of destroying it.'

Unfortunately, I had limited space to explore this in the book itself. So I've filled in some more details in an article about the NUX on the Lion & Unicorn website. 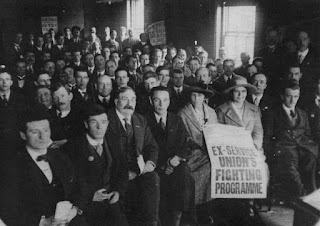